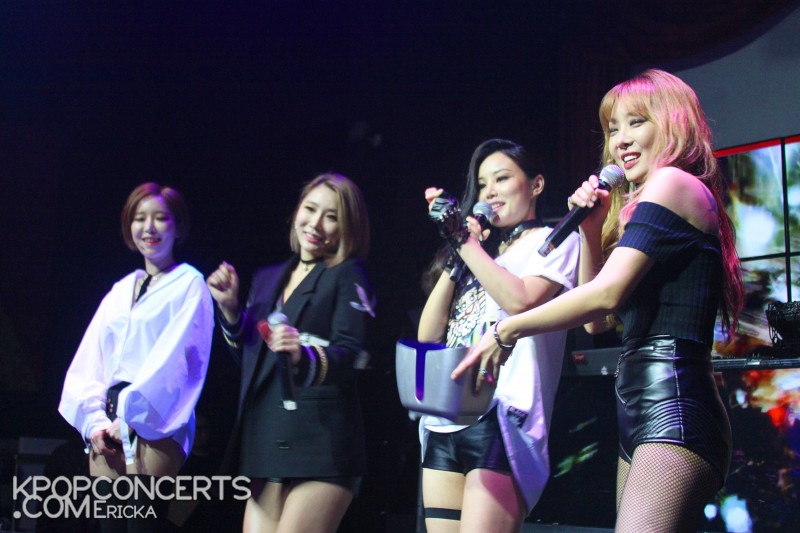 After ten years in the making, Brown Eyed Girls finally held their long awaited solo concert in the United States! On March 18, the legendary quartet celebrated their ten year anniversary at Feria Los Angeles. The club, nestled in the heart of KTown, provided fans with the most intimate concert experience.

Kero One (the producer behind Park Kyung’s “Ordinary Love”) served as the night’s DJ and warmed up the crowd with mixes of his favorite artists, such as Dean, Zion.T, and Tablo. Beatbox champion extraordinaire KRNFX opened up the show and demonstrated his talents with refreshing renditions of The Jackson 5’s “I Want You Back,” Justin Bieber’s “Love Yourself,” and more. The night started off with good vibes and had everyone anticipating the night’s long-awaited headliners.

JeA, Narsha, Miryo, and Ga In were greeted with ear-piercing screams as they took their turn on center stage. The set started off with a bang as the girls belted out their powerhouse vocals in “Sixth Sense” followed promptly by their signature fan choreography in “Sign.” Afterwards, the group energetically introduced themselves to their devoted fans and Miryo, who could also speak English, served as the group’s spokesperson and translator for the night. She said, “First of all, we are so sorry that we changed our concert location suddenly, but thank you all that still came to the concert tonight, you are the best!” JeA’s self-composed masterpiece, “Kill Bill” was next followed by the group’s newest song, “Brave New World.”

The girls graced the stage with their humbleness and constant interaction, even joking around with fans. Those die hard fans that purchased VIP Meet & Greet tickets were given the ultimate package – an individual photo with the girls, their autograph, and a short time to converse with them. The girls were all smiles throughout the night and held raffles to giveaway signed copies of their newest album, ‘Cream.’ A playful fan interaction occurred when Miryo and Narsha said “Shake it, shake it!” while stirring the pool of raffle tickets and a fan started singing Sistar’s summer hit song. Narsha stopped, went over to the fan, and pretended to be annoyed, “Sistar?! No, no! BROWN EYED GIRLS!”

As all things must come to an end, the night ended with the track that earmarked their place in the K-Pop industry – “Abracadabra.” With thick nostalgia in the air, the girls and their fans danced their hearts out before bidding their final goodbyes and ending with a promise to meet again.