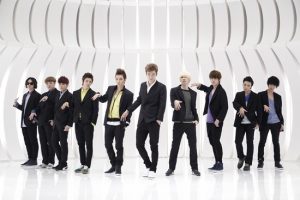 Singaporian Super Junior fans rejoice! It has been announced that Super Junior will be performing on two nights at the Singapore Indoor Stadium, as part of their Super Junior World Tour Super Show 4 concert tour.

Concert organiser Running Into The Sun (RITS) announced on Tuesday that the Korean Boy Band, Super Junior, will be playing on February 18 at 6pm and hold an early concert on February 19 at 4pm. For the fans, this means double the amount of tickets are available, allowing more to come see their beloved Super Junior. Tickets to the group’s Singapore stop will go on sale from January 14 for OCBC cardholders, with public sales commencing on January 15 at noon. Please be aware you may only purchase 4 tickets per transaction to prevent bulk buying.

This upcoming concert will have a three hour event which features a massive stage so every fan can get a little bit closer to the popular boy group. As an added feature, there will be water effects!
Enjoy the concert Singapore E.L.F.s!