With K-Pop’s growing popularity abroad, idol groups, both big and small, have pursued opportunities in the international market. The latest group to set its sight overseas is UP10TION. Debuting in 2015 alongside other notable acts like Monsta X, iKON, and Seventeen, the ten-member idol group (Jinhoo, Kuhn, Kogyeol, Wei, Bitto, Wooshin, Sunyoul, Gyujin, Hwanhee and Xiao) saw their share of success in Korea and Japan, faced (and overcame) adversities, and returned stronger than ever with their Honey10 fandom by its side. 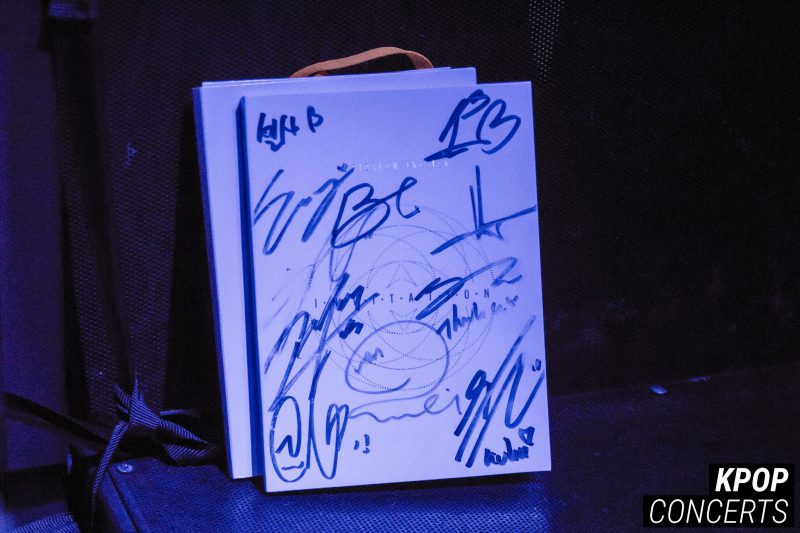 Presented by Studio PAV and TOP Media, the UP10TION 1st U.S. “Meet & Live” Tour in Los Angeles was held on June 27 at The Mayan in Downtown LA. The hour-and-a-half event was jammed pack with several of the group’s best tracks and the inclusion of fun, interactive segments to get the Honey10s involved in the festivities. Honey10s arrived as early as midnight to see their favorite group up-close. VVIP ticket holders were granted several fan engagement opportunities including hi touch, a group photo session, and a free Invitation album to be signed by all members at their exclusive fansigning before the show. 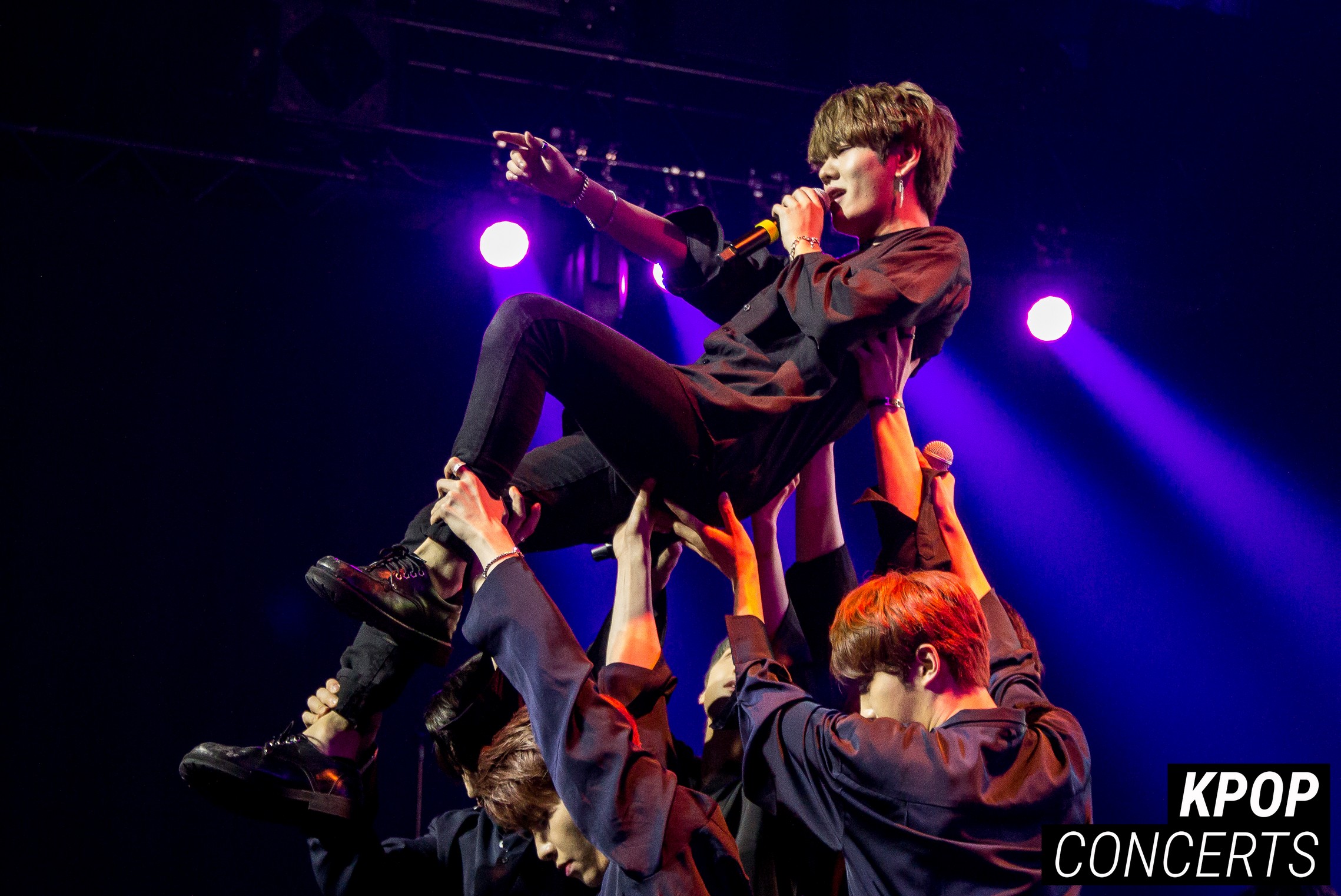 UP10TION kicked off their LA leg of the tour with the tropical house track, “Runner,” and the electronic bop, “Going Crazy.” Both songs’ choreographies were cardio intensive and required stamina, proper breath control, and a lot of practice to achieve such flawless performances. Only during their MENTs and breaks between sets could you hear the members’ intense breathing from the demanding routines. However, as soon as the next song began, the group jumped right back in and gave it their all. 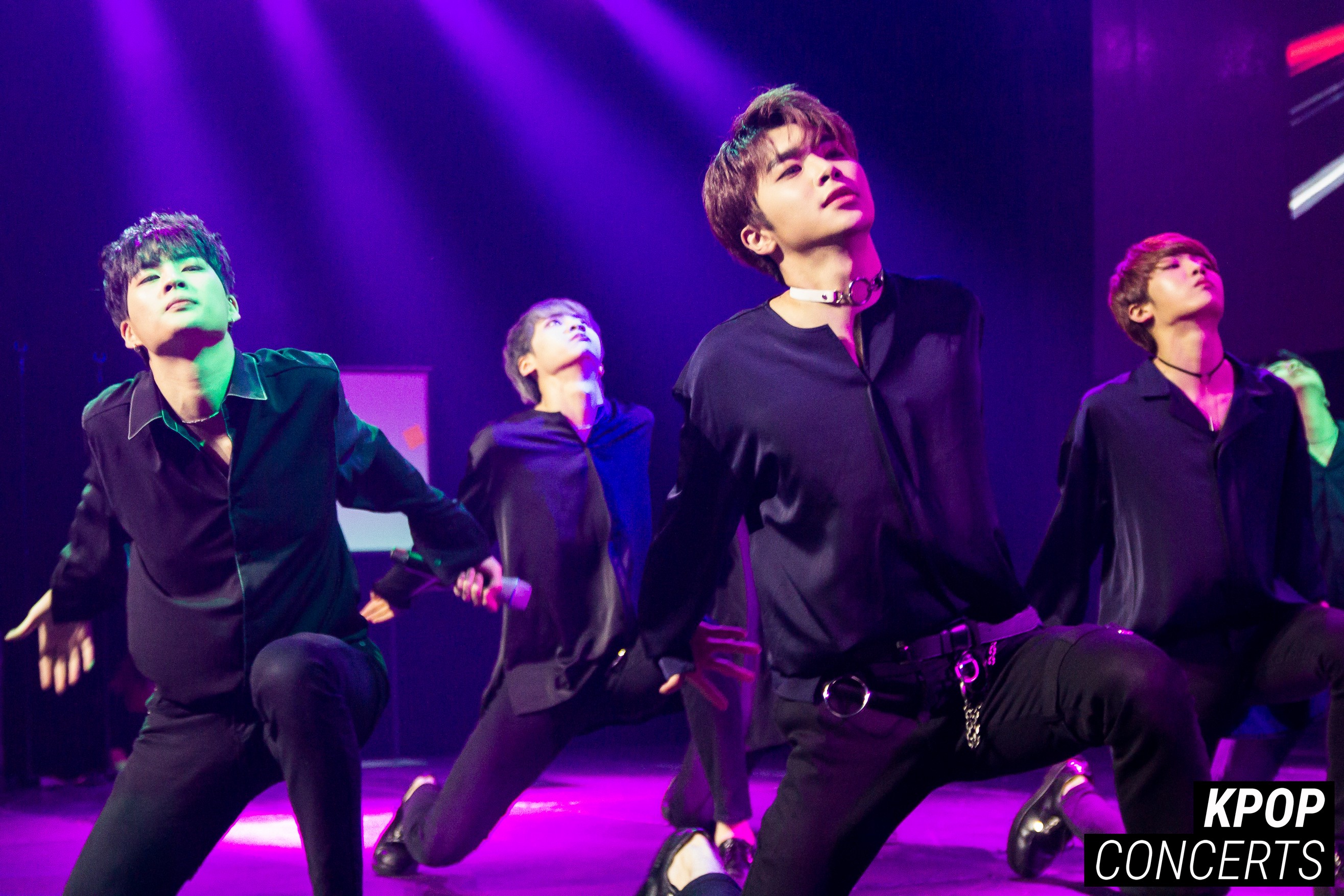 UP10TION followed up with their most recent song, “Candyland,” which had the entire audience chanting “welcome to my candyland~” in unison. The boys also performed their throwback debut song “So Dangerous,” the sweet ballad “Because,” fan favorites “Attention” and “White Night,” and the rapper line + Jinwoo-exclusive, “Still With You.”

Unlike most international K-Pop shows, UP10TION spoke entirely in English with no interpreter or native English speakers in their group. During their introductions, each member had time to speak to the crowd and voice their excitement for the show. They each looked forward to making fond memories with the LA Honey10s. Of the ten members, main rapper Wei caught everyone’s attention with his impressive English pronunciation and his comfort with making jokes and jabs at the other members in English.

The first interactive segment of the night was a Fan Q&A board. Prior to the start of the show, Studio PAV staff handed out post-it notes for Honey10s to write down questions or requests that they had for the group with the hope of it being selected during the show. Two selected post-its requested for Kogyeol to dance the killing part of “Candyland” and perform aegyo for the crowd. One fan asked why Kuhn was so handsome to which the lead rapper nonchalantly said that it was because he had a lot of Honey10s with him. Leader Jinwoo then added, “Kuhn is [a] very hot guy. Sexy guy!” and had the fans screaming. When asked for their favorite superheros, Hwanhee proudly said, “Wakanda forever” in reference to Black Panther. Through the rest of the Q&A session, Honey10s learned that Wooshin’s favorite colors are black and purple; Jinhoo’s favorites are purple and white; and Xiao’s favorite summer hobby is swimming (but was called out by his members for lying.)

The second interactive segment was called “City Speed Quiz” that required the members to be creative and quick on their feet. The game essentially operated as a time limited Charades where each member would be shown a key term associated with LA and then have the audience guess the term based on his actions. The terms included Hollywood, Santa Monica, Disneyland, Rodeo Drive/Beverly Hills, The Grove, In-N-Out, and more. Vocalist Hwanhee definitely had the hardest time explaining Hollywood and resorted to stomping on the floor, pointing at himself, and aggressively “high fiving” the air to signify the Hollywood Walk of Fame.

After wrapping up the concert with an encore stage of “Stuck on You,” UP10TION had one more special fan engagement activity called “Pick-a-Pose Snapshot.” Fans were able to purchase “Pick-a-Pose” vouchers that guaranteed them polaroid photos with any UP10TION member of their choosing. This particular fan perk is the first of its kind here in the US and provided a once-in-a-lifetime opportunity to meet idols up close and personal. 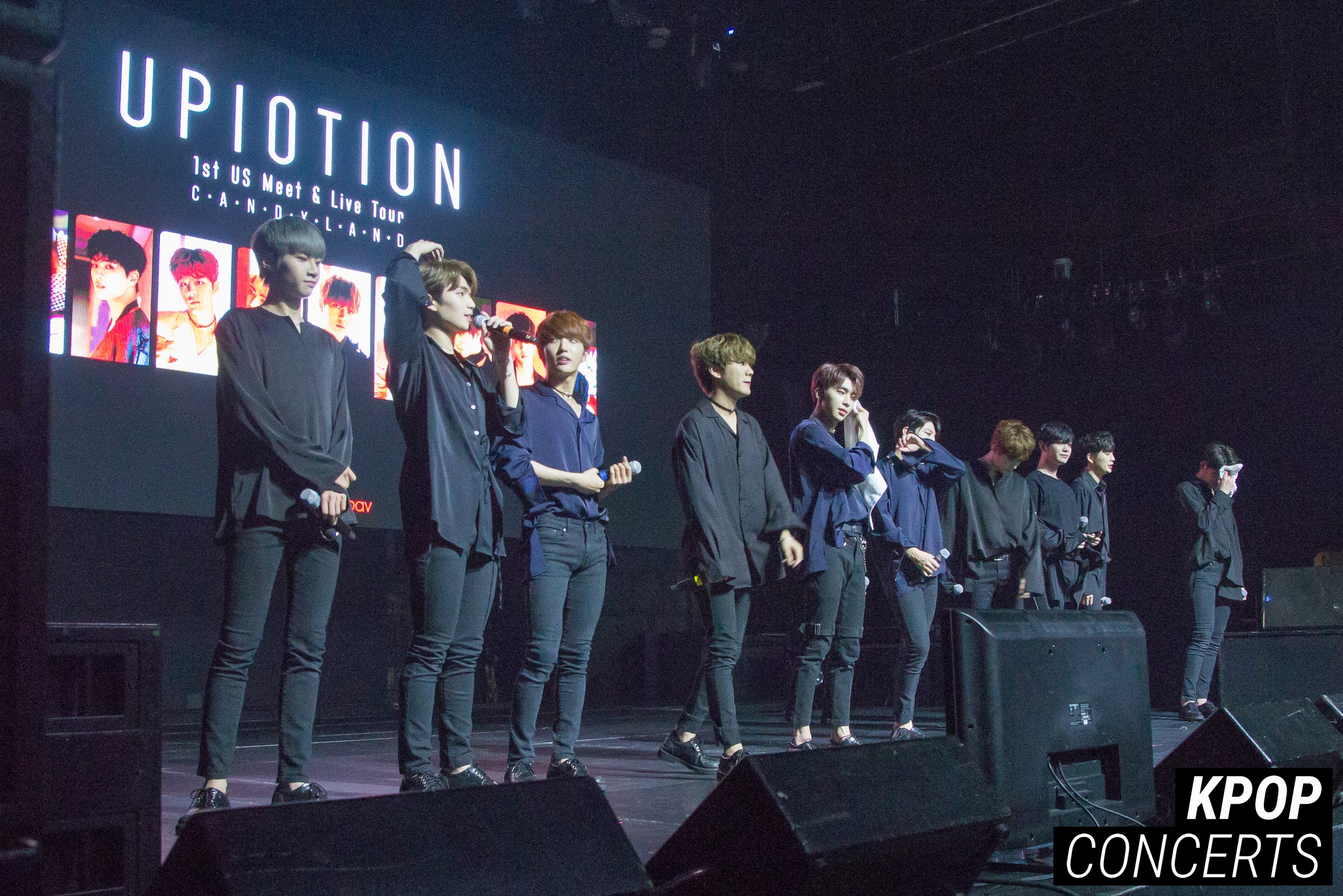 Overall, the meet and greet provided fans with an intimate experience with UP10TION, a boy band near and dear to their hearts. The atmosphere was filled with joy and laughter as their personalities and charisma brought the stage to life, giving Honey10s an unforgettable experience. UP10TION’s popularity is sure to grow through their hard work, dedication to their fans, and their outstanding performances. We hope to see UP10TION in Los Angeles again in the very near future!

Click the link below for our full photo gallery.