On June 1, The Rose took the stage at the Fonda Theatre in Los Angeles. The sold out show was packed with ecstatic Black Roses eager to see the boys off on the last stop of their seven-city Paint It Rose US tour.

Earlier this year, Kpopconcerts.com had the opportunity to interview the up-and-coming band before their European tour. The members, Woosung (vocals and guitar), Dojoon (vocals, guitar, and piano), Jaehyeong (sub-vocals and bass), and Hajoon (sub vocals and drums) were initially surprised that a foreign media outlet had reached out to them. “When you’re overseas, do you actually notice fans’ reactions to our band or our music?” asked Dojoon. “We have no way of knowing what’s going on overseas…so we’re amazed that people overseas even know about us.” Little did they know what the upcoming few months had in store for them. 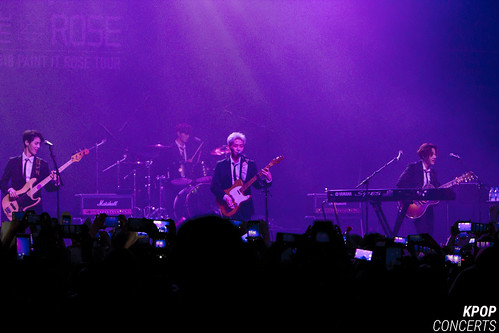 The band kicked off the night with “California,” “Candy (So Good),” their own rendition of Pharell’s “Happy,” and “OMG.” The concert’s setlist was seamlessly woven between the band’s official songs, original unreleased tracks, and fan favorite covers. 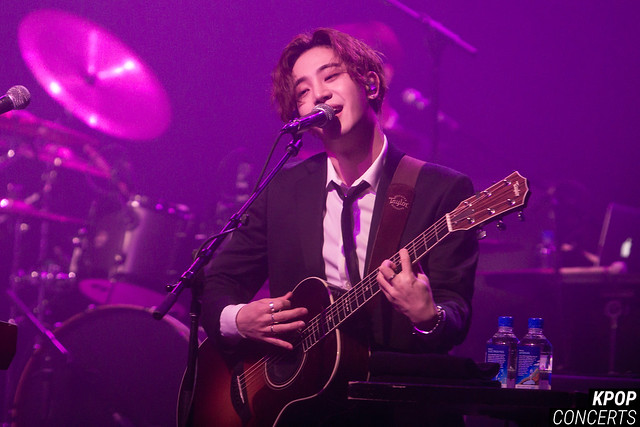 Before moving onto their sweet ballad “I.L.Y.,” the band kindly asked Black Roses to sing it for them. Dojoon accompanied them on piano and the fans immediately jumped in and sang the chorus, word-for-word, which left a smile on each of the members’ faces. The fans in turn also planned a special fan project just for this song. TheRoseCA on Twitter created and distributed banners for both the San Francisco and LA stops that read, “흑장미 ❤ 더로즈,”  which translates to “Black Roses ❤ The Rose” in English. 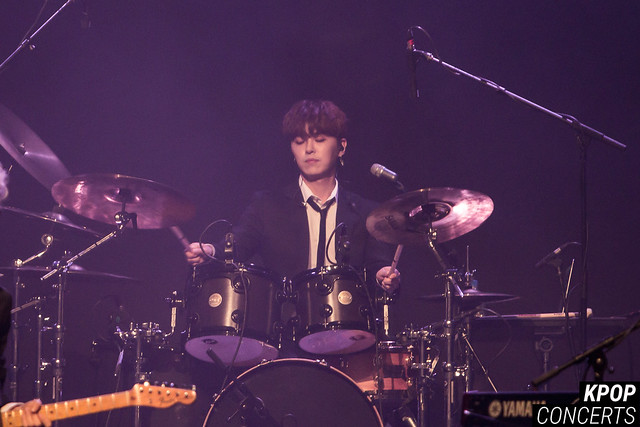 If you’re new to The Rose, one of the first things you should know about them is that Jaehyeong and Hajoon have vocals as equally amazing as Woosung’s and Dojoon’s. Although they do not have their own lines in The Rose’s new tracks, Jaehyeong and Hajoon had their own moment to shine in “놓지못하게 (Do Not Let Go).” The track was a throwback to their early busking days on the streets of Seoul and the duo had the fans fawning as they sang the entire first verse and chorus flawlessly. One of the most touching moments of the night was when Woosung reunited with his eleven-year-old brother, AJ. After performing a cover of Big Bang’s “Last Dance,” Woosung stopped the show and called out for his brother, ”Where’s he? Where’s AJ? Bring him out here! Someone bring him out here, AJ where are you?” Woosung shared that he and his brother have a 13-year age gap and that AJ was also very skilled at playing the electric guitar. 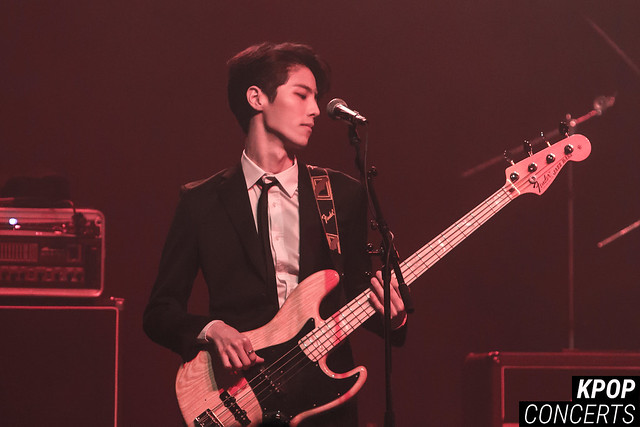 While waiting for AJ, the show continued and Woosung and Dojoon left the stage to transition into special stages. Hajoon got up and moved away from his drum set and took his place in front of the stage while Jaehyeong swapped out his bass for an acoustic guitar for a moving cover of IU’s “Through The Night.” Next, Woosung and Dojoon pumped up the crowd with their rendition of Crush‘s “Oasis.” While the duo’s smooth vocals and body rolls had the crowd screaming, what really stole the show was when AJ finally made his appearance! Woosung and Dojoon escorted the shy boy onstage and Woosung proudly shouted, “This is my little brother AJ! Give it up for him!” Woosung tried to get AJ to show his best dance moves until the brothers decided to dance together and did their best attempts at full body waves. Woosung pulled his little brother to the side and announced that he had not seen his brother in the two or three years since he moved to Korea to pursue his music career. Looking down on the floor with a shy smile on his face, AJ introduced himself, “Hello my name’s AJ, I’m eleven years old,” before quickly hugging his brother and single handedly winning over all the Black Roses’ hearts with his cuteness. AJ shared his favorite songs from The Rose were “Sorry” and “Baby,” but ended up singing “Candy” when asked to sing a snippet of a song. Jaehyeong and Hajoon returned to the stage and the entire band accompanied AJ as he sang a line and channeled his big brother’s aura. The purest and sweetest moment of the night was when Woosung pulled AJ to his side and gave a heartfelt speech,

The brothers pinky promised and Woosung sent AJ out with a hug and quick peck goodbye. This brief but intimate reunion of the Kim siblings pulled at everyone’s heartstrings. In past interviews, Woosung has always spoke fondly of his little brother. Now onstage, everyone could see how much AJ looked up to his older brother and role model. 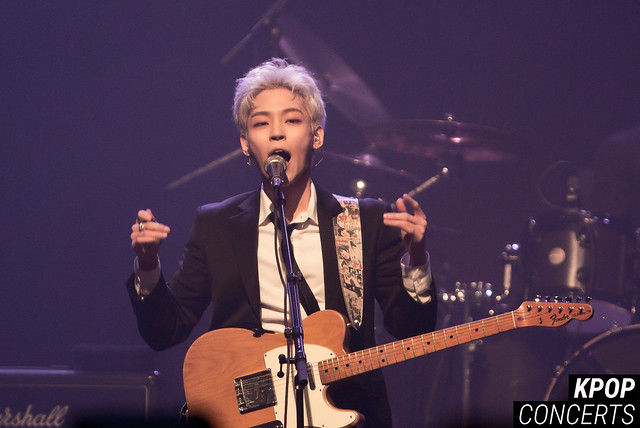 The Rose continued on with the show with their song, “Photographer,” another ode to their pre debut days and kept the feels at an all time high by following it up with Bruno Mars’ “Marry You” and Ed Sheeran’s “Thinking Out Loud.” Dojoon and Woosung told everyone to “make the best out of this moment” as they performed their second single, “Like We Used To.” 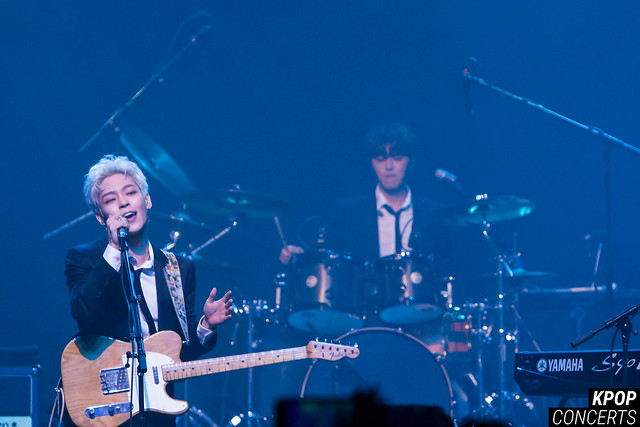 As the show came to an end, the Black Roses were eager for more. Dojoon announced that the next song was a new, unreleased song and that they needed everyone’s participation. Following Woosung’s lead, Black Roses quickly learned the melody and were given the honor of starting off the song. The song, presumably called “Take Me Down,” talks about the desire to escape a crumbling relationship because someone fell out of love along the way. Following suit, the band performed their latest track “Baby” and released their inner rock n’ roll out and amped up the crowd with an epic, hardcore performance. Woosung took the time out to give a heartfelt thanks to MyMusicTaste for making the tour happen and allowing them to meet so many Black Roses who they otherwise would not have known about. The Rose then finished it off with their debut song credited for their breakout success, “Sorry” and walked off stage. 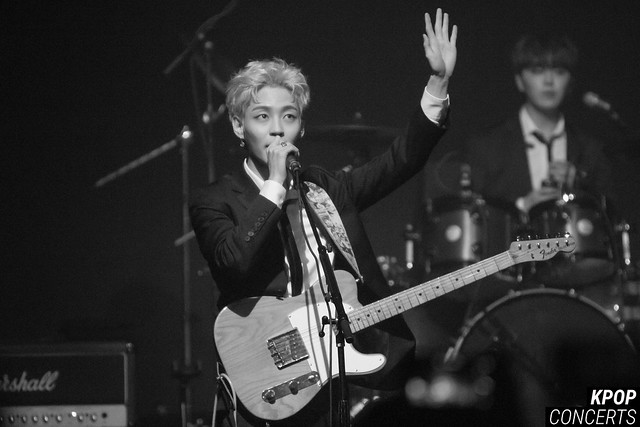 Of course, what’s a concert without an encore? After several minutes of Black Roses chanting for the band, they returned with renewed energy and performed “I.L.Y” again briefly before transitioning to “Beautiful Girl,” made famous for Woosung’s “My name is Sam and I like some ham” line. For their final adieu, The Rose closed off the last show of their US tour with a moving performance of Coldplay’s “Yellow.”

Special thanks to MyMusicTaste and J&Star Company for allowing Kpopconcerts to cover the event. Check out our full photo gallery, below!