Kicking off KCON 2015’s star-studded night was Monsta X!  The six members of the newly debuted group garnered attention for winning a spot in the group on Mnet’s trainee survival program, NO.MERCY.  Although this was their first performance in the United States, they received a warm welcome from their fanatic American fans.  The boys opened the show with their intricate hip-hop routines in “Trespass” and “No Exit.”  However, just because they can get down with the hip-hop beat doesn’t mean they can’t get their aegyo on! Monsta X finished their set with “Honestly” that erupted in aegyo galore as the boys sat on a bench and let loose their tough guy facade for cute flower boy antics.

Fan favorites GOT7 followed up with a charismatic performance.  GOT7 made an explosive entrance as each member popped out from all sides of the stage for a synchronized dance break that had fans gawking at their precision and synchronicity. Then, the boys had the crowd screaming with the opening riffs of “Stop Stop It“ followed by their newest track “Just Right.” They showcased their acrobatic skills in “A” that had the whole stadium erupting in fanchants.  The group kept the momentum going with their debut single, “Girls Girls Girls” before wrapping their performance up with “Bounce,” the single from Jr and JB’s pre GOT7 days as a duo called JJ Project.  Although they were missing the rambunctious Jackson (who was filming Laws of the Jungle), the members stood tall as six and completed their set flawlessly.  Much to everyone’s surprise, GOT7 and Monsta X returned onstage for a hardcore dance battle.

Third to take the stage was the only girl group of the night, Sistar!  Also making their L.A. stage debut, Hyorin, Bora, Dasom, and Soyou had the crowd up on their feet dancing along to “Shake It,” “Touch My Body,” and “Loving U.” It’s no wonder that the group has been known as the “summer-it” girls with their upbeat, catchy songs perfect for any summer playlist. The girls proved that they are more than just pretty faces with a perfect performance of their ballad, “Lead Me.”  But of course, what is a Sistar performance without their signature “Ma Boy” body rolls?  The girls wrapped up their set with the slow R&B track that won over the crowd.

Singer-songwriter Roy Kim brought down the heat with his smooth, acoustic rock vocals.  The soloist rose to fame after partaking and winning first place on Superstar K4. Although he doesn’t have flashy choreography like his fellow KCON artists, Roy’s soothing vocals commanded the crowd’s attention.  He performed his newest song “Home” followed by “Love Love Love” from his debut studio album.  The artist took a brief moment to promote his advocacy for UNESCO’s Girls Education, an equal opportunities program in education for women all over the world.  Roy then jumped right back into it and wrapped up his set with “Bong Bong Bong” followed by his sweet rendition of Jason Mraz and Colbie Caillat’s “Lucky” featuring Sistar’s Soyou.

Finally, the headliners of Day 2 Super Junior took their turn onstage.  Leave it to one of the most iconic figures in K-Pop to turn KCON into their own Super Junior Super Show concert!  The whole entire Staples Center was enveloped in a sapphire ocean of blue light sticks, headbands, glow-in-the-dark shirts, and more as Super Junior’s loyal fans called ELFs gave a warm welcome to the boys.  The love was much appreciated as the eight members gave an eye opening performance and started off their set with their debut song, “Twins (Knock Out).” During their rock rendition of “Sorry Sorry,” Heechul appeared on center stage rocking out his drumming skill.  Super Junior then performed an array of mashups of “Shake It Up,” Donghae & Eunhyuk’s “Oppa Oppa” and “Can You Feel It,” and “Rockstar.”  Finally, Super Junior ended KCON Day 2 with a bang with their comeback song, “Devil.”  Although members Sungmin and Shindong could not attend due to their mandatory enlistment, Super Junior still managed to end the night with a bang.

Quintet Red Velvet opened up the second night with their bubbly performance. KCON marked the rookie group’s first performance in the United States.  The girls were a breath of fresh air with their cute, catchy, and fun dance moves from their hit tracks “Ice Cream Cake” and “Happiness.” However, their set wasn’t all dancing as the rookie group delivered a wonderful performance of “Something Kinda Crazy” and surprised the crowd with a soothing cover of Pussycat Dolls’ “Stickwithu.”  Even with their colorful, bubble-gum pop style, Red Velvet showed that they could definitely hold their ground against the other phenomenal acts.

Hip-hop extraordinaires Block B have already left their mark on the East Coast with their three-city tour in 2014 and they were ready to set their L.A. debut stage on fire!  Block B’s leader Zico riled up the crowd with his swag-filled single “Tough Cookie” followed by Block B’s subunit, Bastarz  (P.O, U-Kwon, and B-Bomb), for their debut track, “Conduct Zero.”  Remaining members Kyung, Taeil, and Jaehyo then joined the rest of the members onstage and gave an energetic performance of “Her” before closing their set with “Very Good.”  No one could argue that the boys were living in the moment as they turned up onstage, got their “Whip/Nae” dance on, and interacted with the fans around the stage. 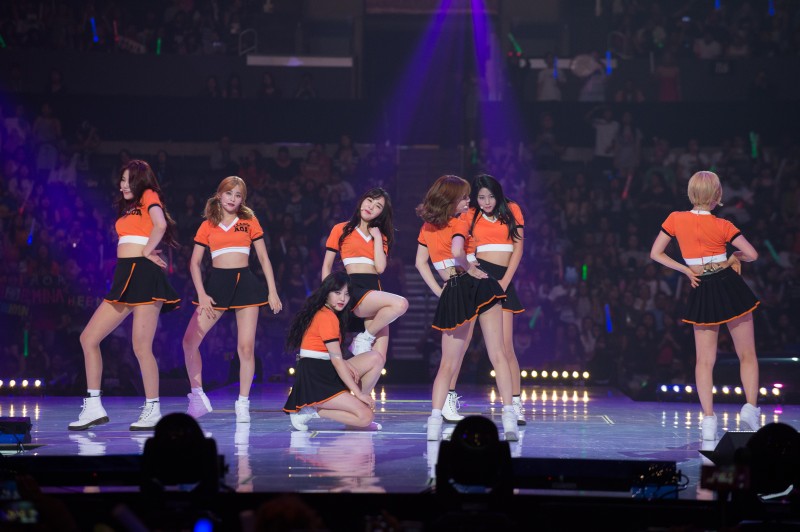 AOA (Ace of Angels) won over all the fanboys with their sexy dance numbers and flawless vocals.  The girls made a unique entrance with some of the members being escorted by Lacrosse players across the KCON floor onto the stage while the others exited a vehicle before taking their places for their latest hit song, “Heart Attack.”   The girls had the whole crowd dancing along to “Short Hair,” “Confused,” and “Mini Skirt.” AOA’s rapper Jimin, who has rose in popularity for appearing on Unpretty Rapstar, had her own solo stage and showed off her rapping skills in “Puss.”  Also their first performance in the U.S., the girls were ecstatic to be performing both at KCON LA and KCON NY later that week.  With their top-charting back-to-back hits, AOA is definitely a group to watch out for.

KCON expanded its music scope with the inclusion of R&B duo Zion.T and Crush.  Zion.T took home the MTV Iggy award for “Best R&B Album” in 2014 while Crush, the rookie of the team, produced numerous songs for Korea’s top rappers before making his debut as a singer/rapper last year.  Together they make a powerhouse R&B duo.  They began with their collaborated debut single, “Just.”  Although lacking in dancing skills, Zion.T and Crush made up for it by their huge stage presence and fantastic performance.  Zion.T performed his song “Yanghwa Bridge,” an emotional ballad about his father’s hardships, alongside Red Velvet’s Wendy.  Then for their closing number, Crush and Block B’s Zico joined Zion.T onstage once again and performed Crush’s newest track, “Oasis.” The phenomenal event ended with the mind blowing performance of one of the legendary veteran groups in the K-Pop industry – Shinhwa.  Their set opened up with a short flashback video that showcased the group’s strong teamwork and friendship throughout their seventeen year-long career with the phrase, “It started as six, It’ll end with six. We are one.”  Shinhwa was the epitome of idol groups as they showcased their self-choreographed dances, belted flawless vocals, and exhibited musical versatility with each song.  The group made their grand entrance and kicked off their first major U.S. performance with their 1999 hit, “T.O.P“.  Known for their musical versatility, Shinhwa made the crowd go crazy with their electro-pop hit-track “This Love” that was accompanied by a vivid light show.  They continued on with “Sniper,” an R&B centric track that was released this year in lieu of their seventeen-year anniversary.  Closing out the night with “I Pray 4 U,” Shinhwa proved in those twenty minutes why they have remained on the forefront and dominated the Korean music industry.

[RECAP] Fans “Ignite Their Feels” at KCON 2015 in Los Angeles

ASTRO Preparing to Make Their Debut