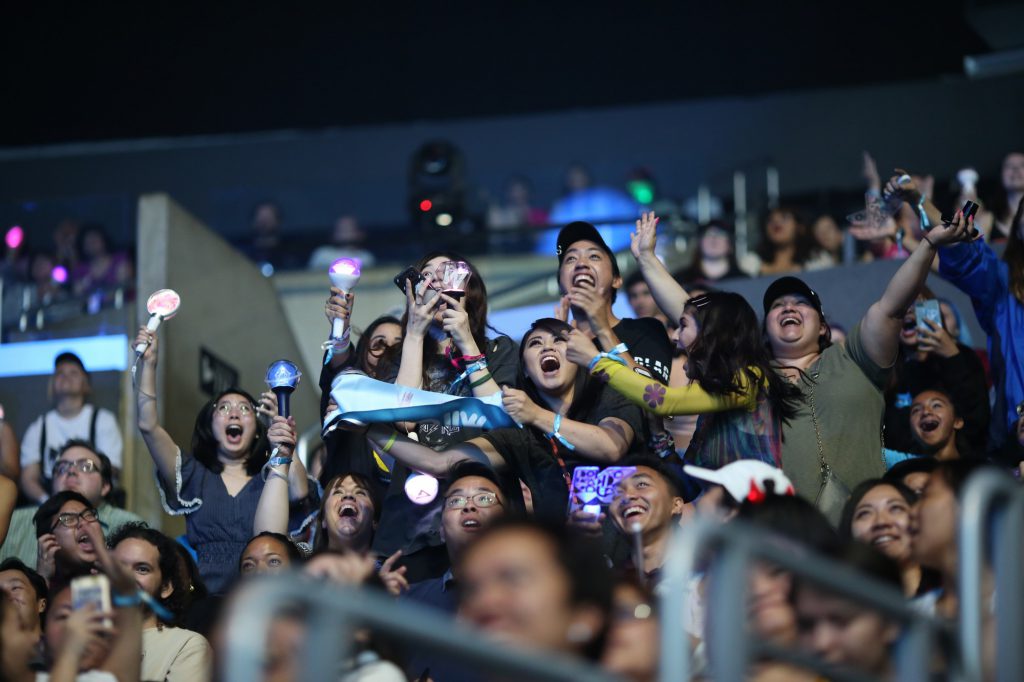 After KCON 2018 LA successful first M Countdown concert, anticipation was high for an equally enthralling delivery of K-pop excellence. The pre-show kicked off with a performance by Cover Star K Winners, SoNE1, who performed a cover of popular Seventeen track, “Very Nice.” As expected of these talented winners, they showcased jaw dropping synchronization and engaging stage presence.

The last pre-show performance was by singer-songwriter Echae Kang, who is known for incorporating both electronic and acoustic elements into her music. She first showcased a song she composed, “Hitch,” on her violin. The mysterious, alternative style was a definite crowd pleaser. Next, Echae performed her song “Sorry For Us,” creating the beats right on the spot using her hands and feet, paper, and the instruments around her. She finished her set with a K-Pop medley in which she performed her own renditions of Twice’s “What Is Love,” iKON’s “Love Scenario,” Red Velvet’s “Red Flavor,” and BTS’s “Fake Love” using a violin, synthesizer, and percussion. An impressive close to the pre-show performance. 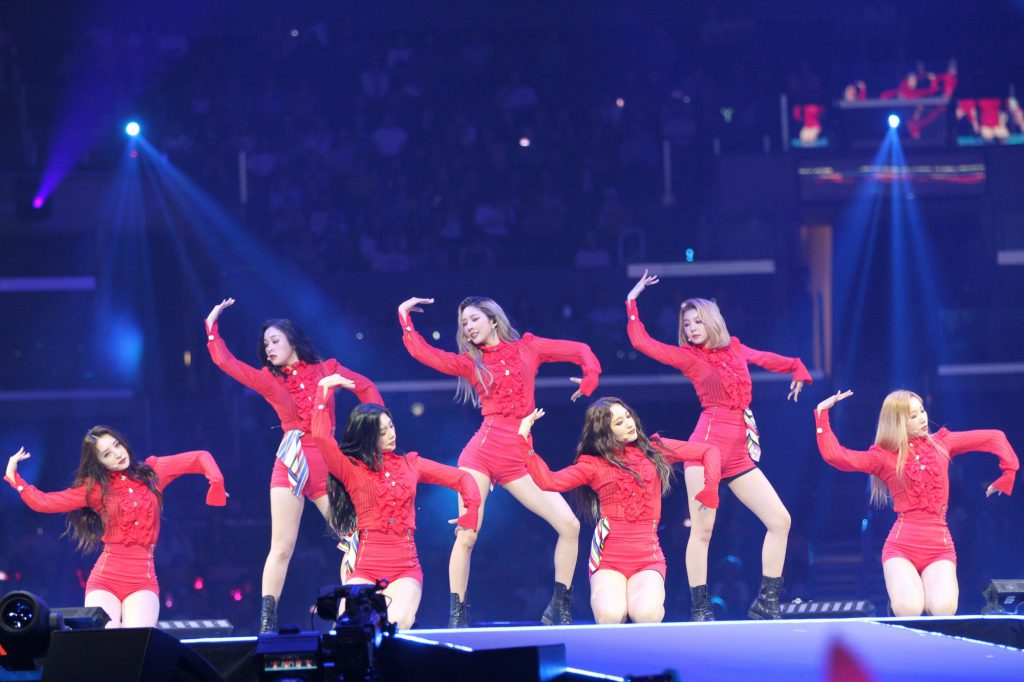 But the show was just getting started. Girl crush group Dreamcatcher set the stage on fire with their high energy, unique performances. Their strong rock beats and powerful choreography has allowed them to stand out in the saturated K-pop industry. They performed their latest title track “You and I,” followed by darker track, “Goodnight.” 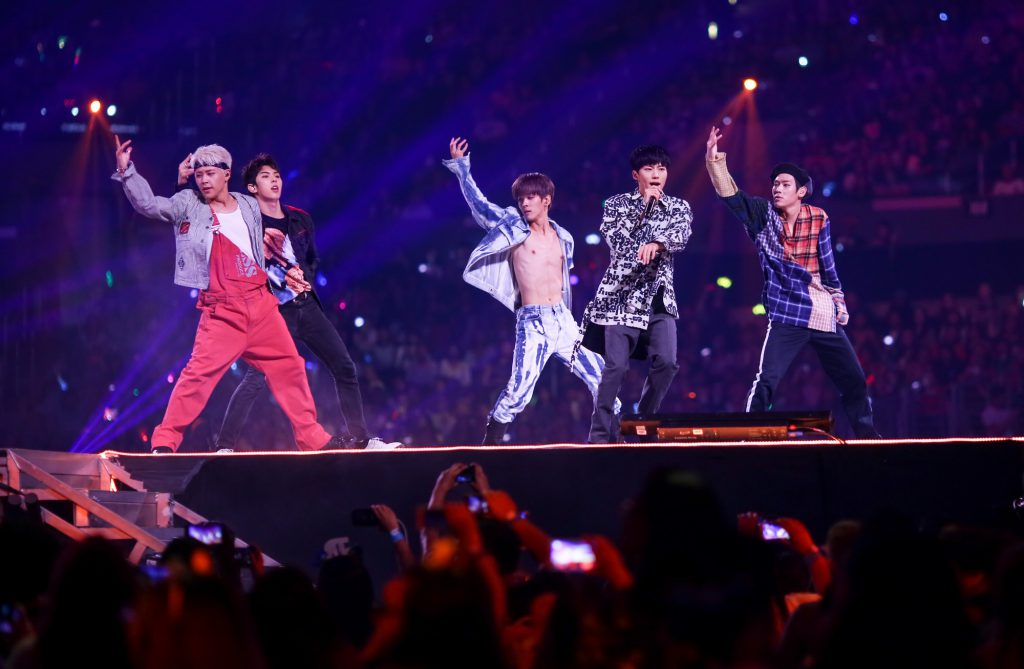 The MC’s for the night were Seventeen’s LA natives, Vernon and Joshua, who introduced, IMFACT. It is only recently, after a 2016 debut, that the quintet has gained attention for their vocal prowess on the competition show, The Unit. They started with a never-before-seen, sneak peek performance of their new song,”NANANA.” They then finished their set with a performance of their previous title track, “The Light.” 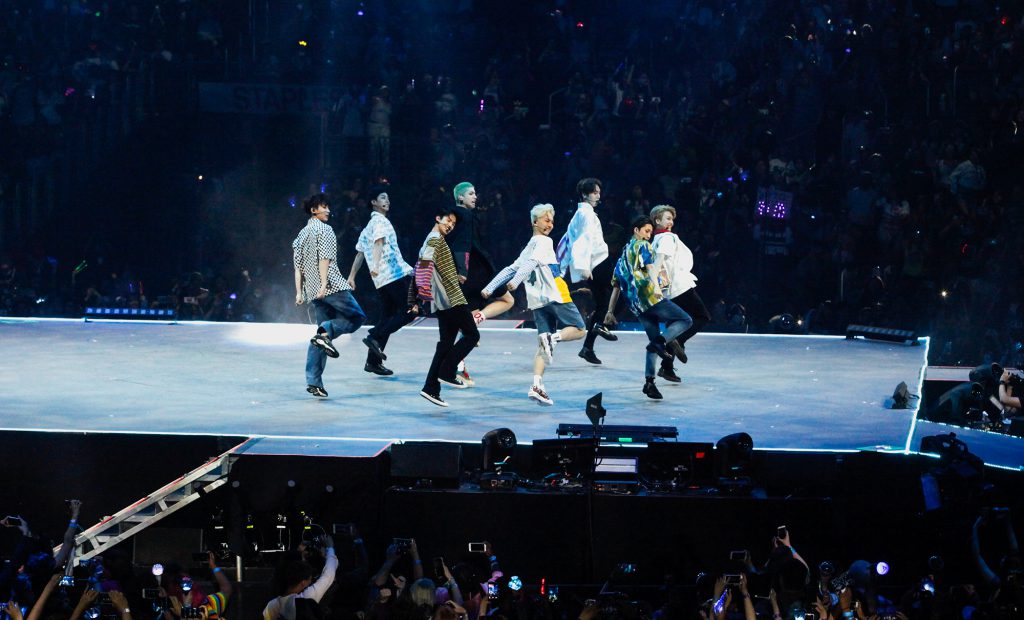 Special guest Jun Curry Ahn entered next, violin in hand. He played a gorgeous melody, which turned into the opening for Pentagon’s “Shine.” The crowd was dancing along to the famous “hammer choreography” as Pentagon transitioned onto the stage. Next, they performed their first digital single, “Beautiful,” followed by the fan-favorite, “Runaway.” 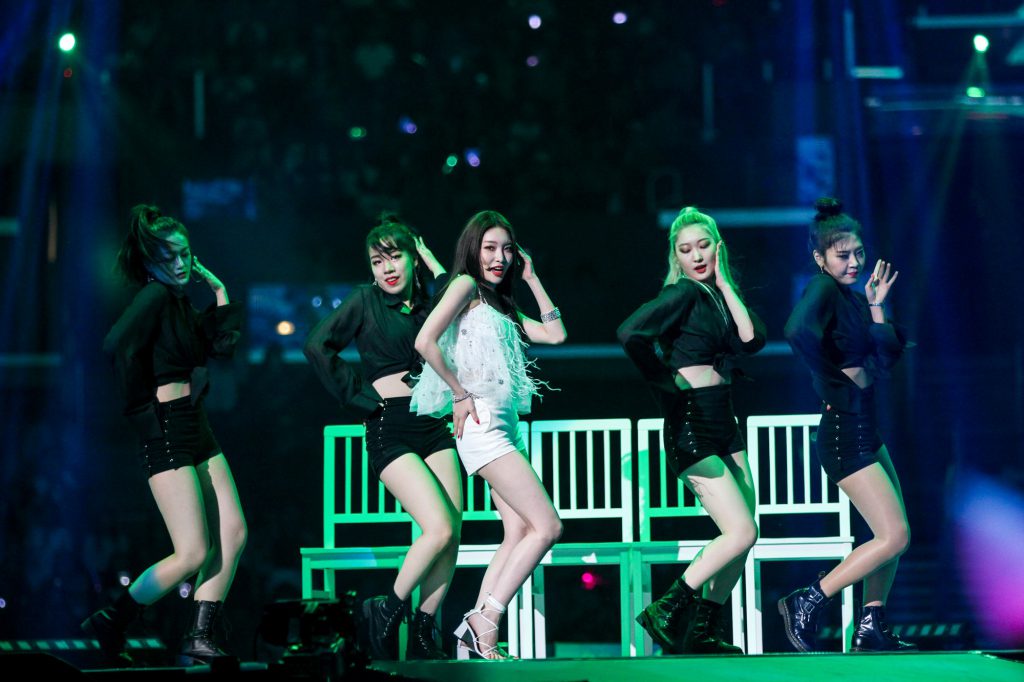 After shining Pentagon, solo artist CHUNG HA took the stage with her graceful and powerful dance moves. She showed off her ability to be both cute and mature with her performances of “Love U” and “Rollercoaster.” 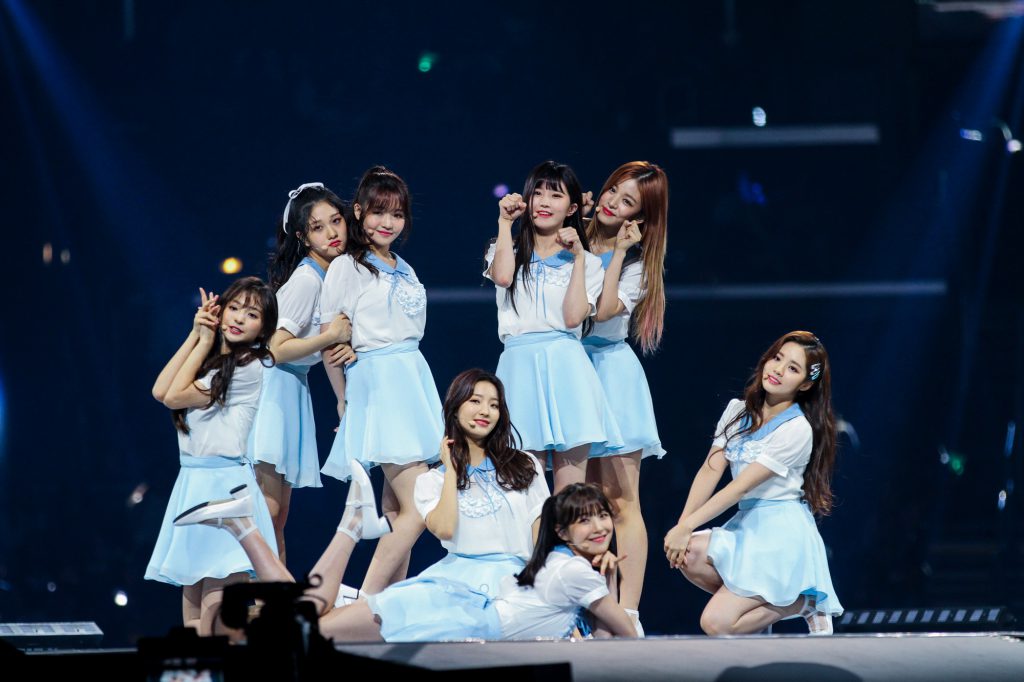 Fromis_9, a group made up of the winners Mnet’s Idol School, showed of their cute and fresh sides with their performances of “DKDK” and “To Heart.” To finish their set, they performed “Glass Shoes,” which was a song that they surprised their fans with before they debuted. 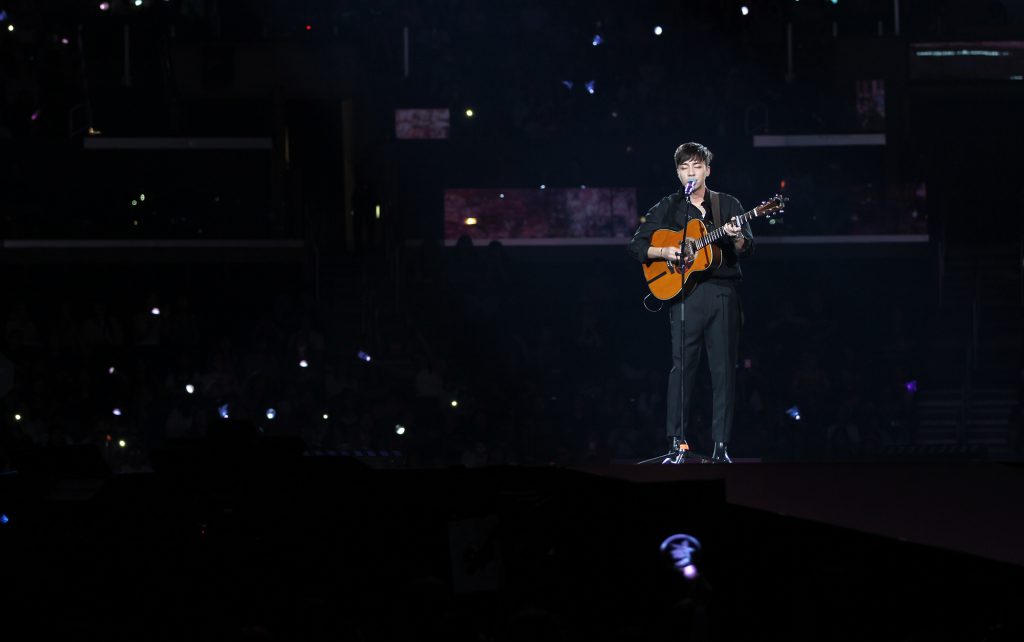 Solo artist Roy Kim took the stage next, guitar in hand. Known for his gentle voice and soothing acoustic sound, he gently shifted the mood from high energy to contemplative satisfaction. First, he performed his sad ballad, “Only Then,” followed by a relaxing cover of Damien Rice’s “The Blower’s Daughter.” He chose to close with his popular song “BOM BOM BOM,” for a lighter vibe. 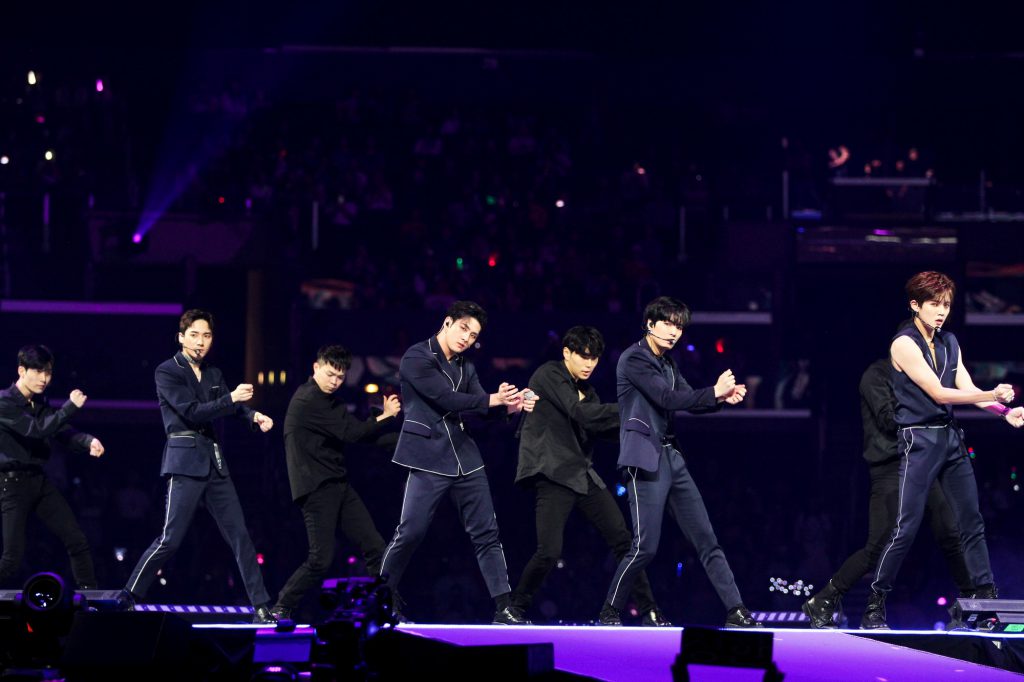 The next artist to perform was NU’EST W, a subunit of Pledis boy group NU’EST. The crowds cheered as they began to perform the first song, “Dejavu.” Continuing, they delivered their well-appreciated sexy, masculine charm with the song “WHERE YOU AT,” but showed off a more relaxed, gentle side with their performance of “Polaris.” They finished their set with a funky, electronic song, “Look.” 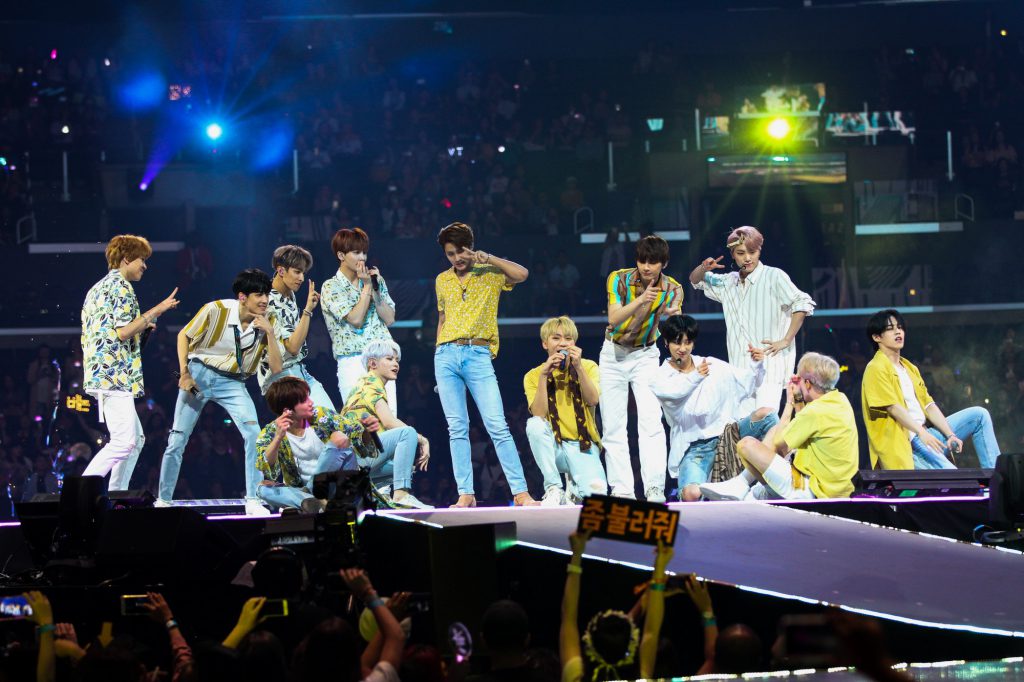 The final artist of the night was the long-awaited, Seventeen. Seventeen has already been acknowledged as one of the most talented groups in Korea, but their popularity in LA was incredible. The cheering in the Staples Center was deafening as they began their performance of their latest track “Oh My!” Before moving on to their next performance, Seventeen received a “wishlist” from fans with different requests for different members. The first members to complete a fan’s wish was DK. He was asked to sing a pop song with his sweet voice, and he chose to sing Justin Timberlake’s “Can’t Stop the Feeling” for the crowd. The next member to carry our a fan’s wish was Jun, who completed the “In My Feelings” dance challenge in his own style. The third member chosen was Hoshi. He sang his part in “Oh My!,” but with an aegyo twist. The fourth member chosen was Vernon, who showed the crowd a rap in English, and the final member chosen was The8, who showed off his break dancing skills. Then, they moved on to their next performance of “Mansae,” which was one of the hottest songs in Korea in 2016. Their final performance was “Very Nice,” which had everyone in the audience singing and dancing along.At the end of the show, the artists filed back onto the stage to thank their fans for coming, and the artists and fans alike shared goodbyes.

It never feels real when M Countdown finishes its last concert. Fans received a wonderful K-Pop treat and left with hearts full and waiting for next year. Who’s heading to KCON 2019?

[RECAP] Dreamcatcher Sells Out First Ever ‘Dream of Us’ US Fanmeet