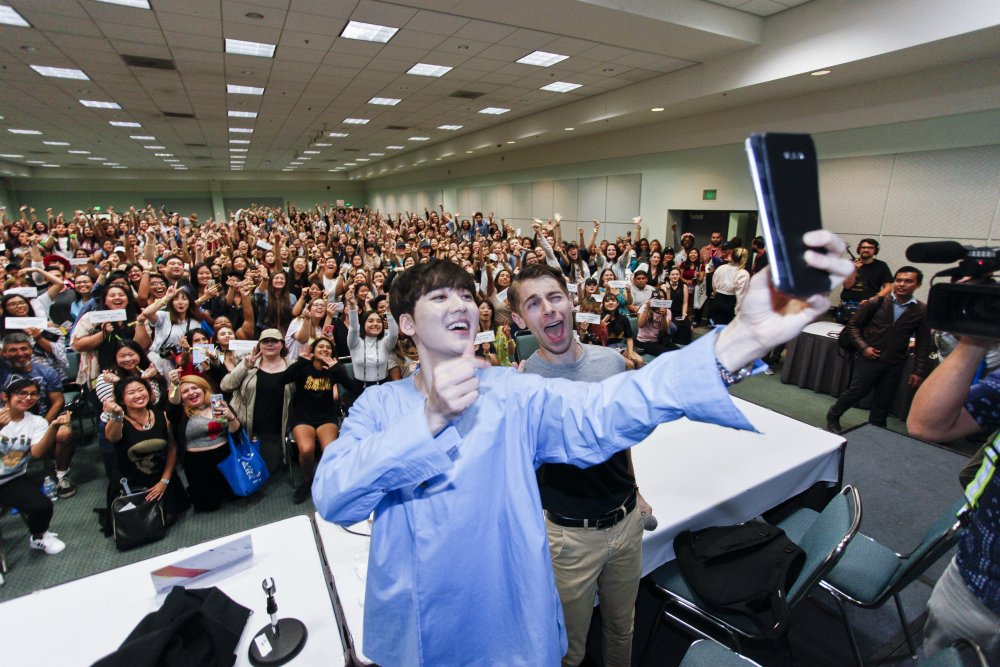 KCON 2017 USA presented by Toyota returned to Los Angeles for its 6th year, drawing a record-breaking 85,000 fans to the Los Angeles Convention Center and Staples Center. This annual flagship event began in 2012 as a single-day event in Irvine with just over 10,000 attendees. Now, KCON LA has expanded into a convention and concert experience over the course of three days with two back-to-back days of concerts featuring the hottest K-Pop artists in the industry. The brand has even expanded its reach to Saudi Arabia, Paris, Japan, and now KCON Australia coming this September. 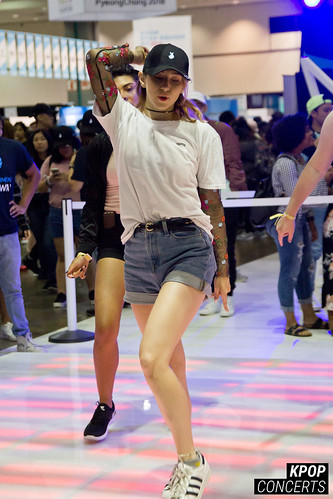 On the first day of KCON, fans were streaming in through the doors as soon as they opened. On the first floor, a variety of booths greeted the fans with beauty products, contests, virtual reality experiences, dance floors, and even free snacks! The first things fans would come across upon entering the convention was the Sponsor Zone. Some of the main sponsors of the event such as AT&T and State Farm, had booths blasting the hottest K-Pop hits and had a dance floor for any KCONer to jump onto and dance to their favorite songs. At the Toyota booth, fans were not only able to perform on a dance floor, but also play the new C-HRANE game, an interactive activity that allowed fans to sit in the new Toyota C-HR and control a claw machine to win exclusive KCON prizes. 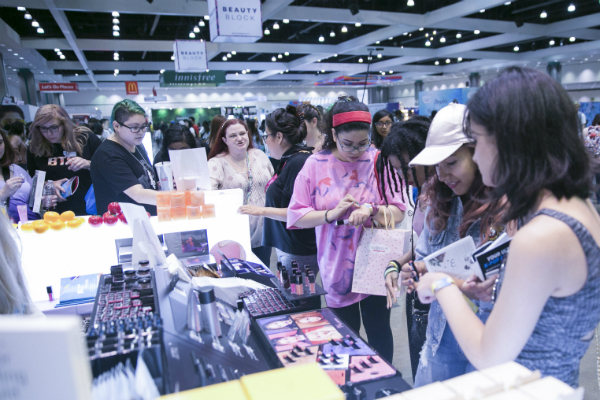 Fans also lined up at the various beauty brand booths at Beauty Block to receive free samples and enter contests for cosmetic prizes. SEP Beauty and W2Beauty were giving out tote bags with skincare samples for those who wanted to try the hottest new products in K-Beauty, and Innisfree had a claw machine where fans could try to pull out the famous Green Tea Seed Serum.

Food companies, like Bibigo and Tous Les Jours, also had booths at the convention, where fans could taste different foods and play games to earn prizes. Outside of the venue was KCON Food Street, where various food trucks waited to provide fans with delicious foods. Many food trucks were selling different types of Korean cuisine, but there was also Japanese food, and different types of dessert like shaved ice, boba, and slushies. Many KCONers came here to grab lunch while at the convention, or stopped by to get dinner after leaving the convention. 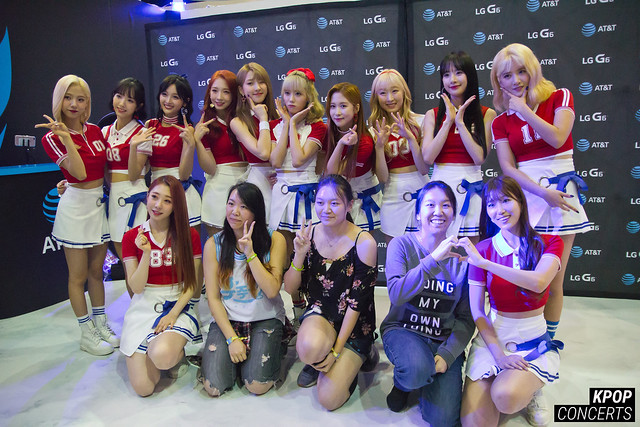 One of the highlights of the event was the number of opportunities fans had to see their favorite artists at the convention. Many of the artists performing at the M Countdown concerts came out to the convention to say hello to their fans. On Saturday, VIXX held a private Meet & Greet sponsored by AT&T where only select fans with a specific voucher could enter. At the exclusive fanmeet, fans were able to play a True/False game with the members, take group photos, and walk away with exclusive VIXX posters from the event. Shortly afterwards, Cosmic Girls made an appearance at the AT&T booth where they met fans, celebrated member Bona’s birthday, and took photos with a few lucky KCONers. At the same time, Girl’s Day also had a special Meet & Greet event at the SEP booth. 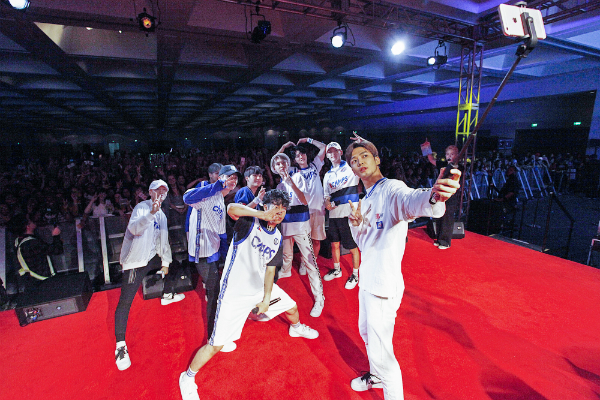 AT&T also hosted a Meet & Greet with rookie group SF9 at the Wiltern AT&T Store in Koreatown. Fans lined up as early as 9AM to guarantee their entry to the exclusive event. By 7PM, the line had wrapped around the block and the boys were met with hundreds of screaming fans. The event consisted of an autograph signing for the first AT&T users and photo-opp with SF9. Unlike most fanmeets where fans are pressured to move as quickly as possible, the staff handling the SF9 Meet & Greet worked in a calm and efficient manner, ensuring that as many fans as possible would get to take a photo with the boys. Unfortunately due to time constraints, not everyone was able to make it into the fanmeet. However, they had a second chance to meet the boys over at Klub KCON, where they were this year’s special guests. 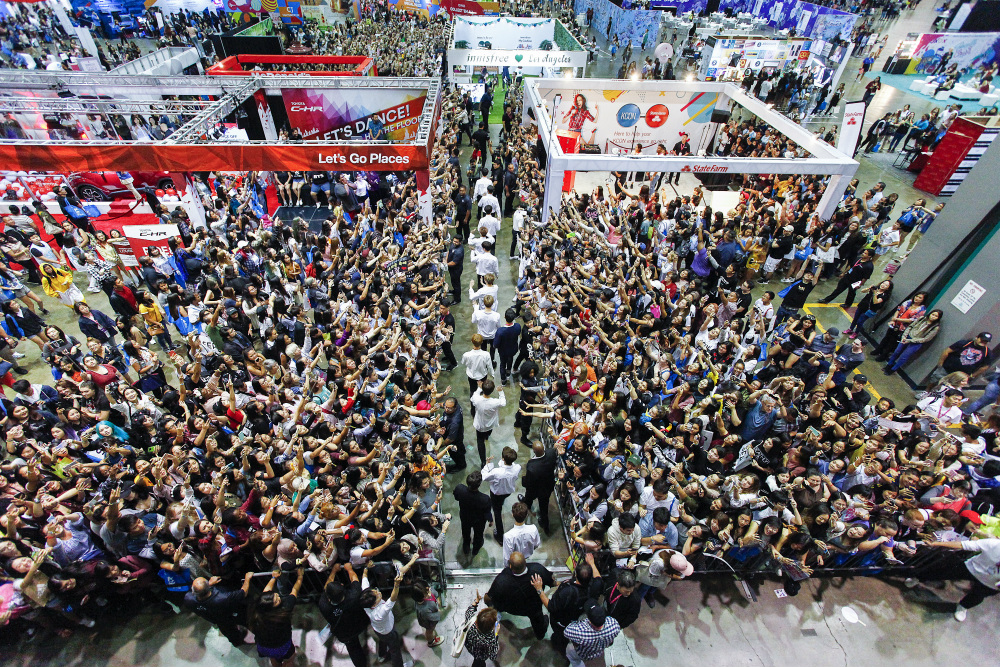 Wanna One also held a Meet & Greet at the Innisfree booth. Fans were already gathered outside of the venue at 5AM to secure a place at the front of the crowd for the 12PM Meet & Greet. When the members finally arrived at the booth, all fans were trying to get a closer look at their favorite members. Staff and security guards had a difficult time ensuring fans’ safety, and had to guide the members back out of the convention hall as quickly as possible. The Wanna One members received an incredible amount of love during their Meet & Greet. 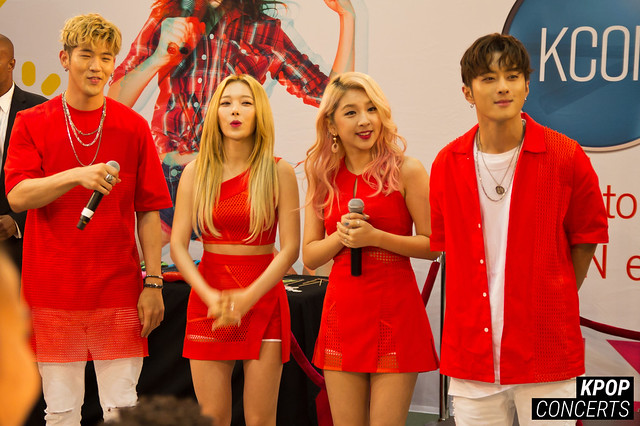 Right after Wanna One’s Meet & Greet was K.A.R.D.‘s Meet & Greet over at the State Farm booth. Although they are still a lesser-known group in Korea, K.A.R.D had already gained many fans in the United States because of their catchy, head-bobbing pre-debut songs. BM announced that they just had wrapped up finishing a docu-series and to stay tuned for it! 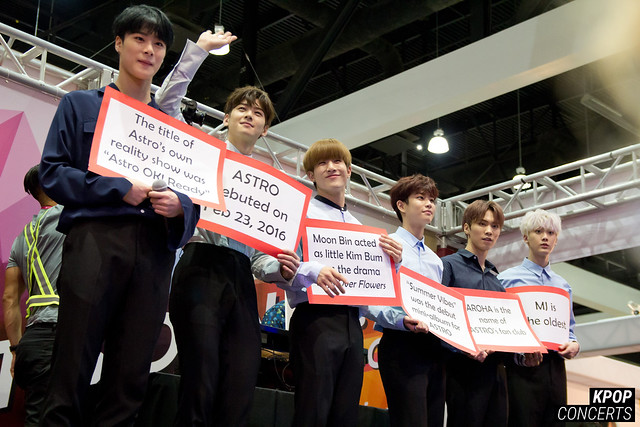 Then, it was rookie group Astro‘s turn to greet their at the Toyota booth. Since their appearance last year, the members returned with a more mature concept and an even larger fanbase after capturing fans’ hearts last year with their cute, refreshing songs that are perfect anytime of the year. 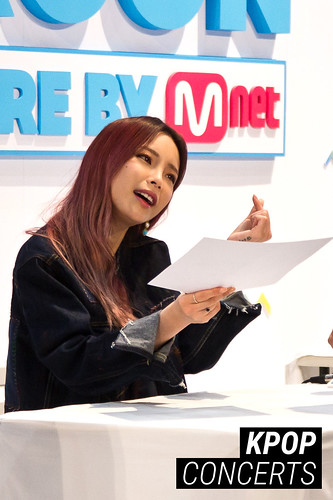 If you couldn’t catch your favorite artists at their Meet & Greet sessions at the sponsor booths and didn’t receive a fan engagement voucher, your next best bet was to see them at Star Square! Star Square is a brand new booth where fans who purchase an artist’s official KCON merchandise could win a chance to receive their autograph.

Meanwhile, acts like Megan Lee, David Kim, and Clara Melody took the convention stage to show off their musical talents, in addition to popular K-Pop cover Youtuber, Juncurryahn, and Koreos, a K-pop dance cover team from UCLA. Youtuber Gotoe also took the stage to do the Random Play Dance challenge with his fans; a random song would play, and anyone who knows the dance could come to the center and show everyone what they’ve got! 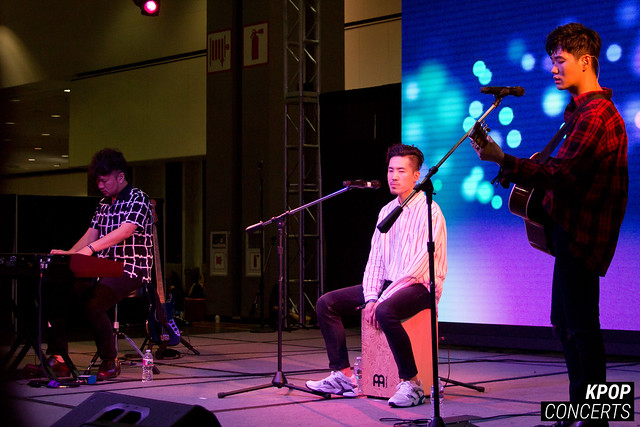 Towards the end of the convention, indie rock band, Iamnot, took the convention stage to perform for the KCONers as the last event before the final concert. Although some were unfamiliar with Iamnot, the band emitted a strong energy and had the audience clapping and dancing along to their music. They had people looking forward to their pre-show performance for the M Countdown concert. 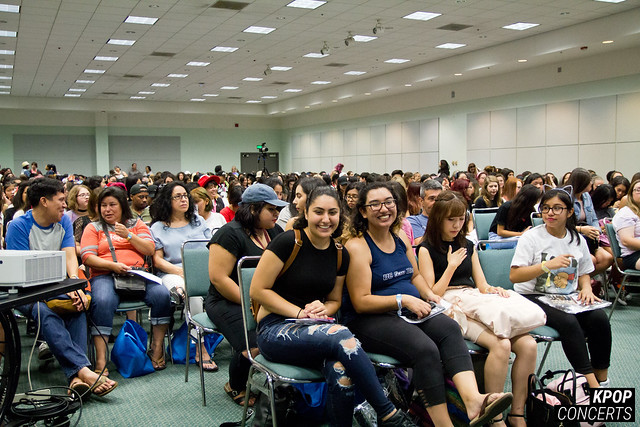 Another highlight of KCON 2017 LA was the wide assortment of panels and workshops that are open to all convention attendees. Fans were able to meet their favorite K-Beauty and K-Pop reaction Youtubers, among others. Let’s take a look at the different panels that were available throughout the KCON weekend.

One of the first panels of the convention was “Fanfiction: Your Ugly Little Secret.” This panel was specially catered towards K-pop fans who wanted to learn anything and everything about fanfiction, which are fictional stories written with idols as the main characters. “How To Learn Korean Faster” was also one of the available panels, where panelists from Talk to Me in Korean came to give studying tips to fans who wanted to learn Korean. For fans who had always wondered how actresses in Korean dramas could look so beautiful without it looking like they are wearing any makeup, the panel “K-Drama Beauty Trends” was there to give them some answers. Panelists from Viki and Dramabeans talked about the different makeup trends in dramas, and how these trends reflect the makeup styles trending all over Korea.

Another popular panel was “Cover Makeup Tutorial With Sunny’s Channel & Gotoe,” where Korean-American beauty Youtuber, Sunny, gave Gotoe, a famous Korean dance cover Youtuber, a K-Pop makeover. Sunny used makeup to turn Gotoe into a K-Pop idol while Gotoe took random questions from his fans in the audience. Many fans were curious to know Gotoe’s favorite artist attending KCON, and he responded with the answer, Wanna One. He was also asked about his favorite place to travel, as he is known to be a frequent solo traveler, and much to the surprise of his fans, he said that his favorite place is Las Vegas! Despite traveling to many different countries around the world, he insisted that he wanted to visit Las Vegas again in the future. Sunny also answered fans’ questions, mostly regarding skincare and beauty routines, and her favorite Korean dramas. All of the fans stayed after the panel ended to take pictures with both Youtubers.

KCON catered to fans of all ages and hobbies with panels like “So Your Kid Is A K-Pop Fan,” where “moms” got the chance to talk to other “moms” about the ins and outs of K-Pop. A popular panel amongst internet-users brought Steven, Evan, and Annie from Buzzfeed, a famous internet media company based in America. The panelists talked about what it was like working with K-pop idols, such as Amber and GOT7, in some of their popular videos. For fans interested in the music production process, Kairos, the founder and producer at Kairos Music Group, held a panel, where he talked about what it is like to work with some of the biggest artists in K-Pop. Some of songs produced by Kairos Music Group include “Mine” by GOT7, “Last Day” by BTOB, “Summer Storm” by Jessica, and national hit “Signal”  by Twice. LDN Noise, also producers in the K-Pop scene, held a panel to meet fans. Based in London, this song-writing duo has produced many tracks for SM artists, such as EXO, SHINee, Red Velvet, Taeyeon, and more. 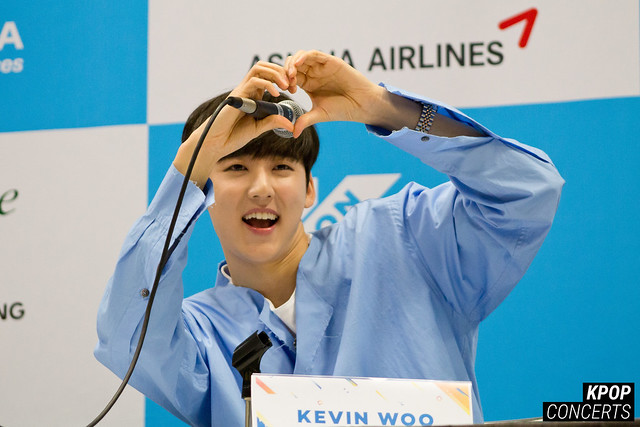 Several stars and Youtubers also held their own panels as a way to meet with their fans. Former U-Kiss member, Kevin Woo, was one of the stars to hold a Meet & Greet. The room was filled with his supporters as he talked about what his desire to continue to make music and pursue new solo ventures, including the creation of his new merchandise line, Love More. In collaboration with clothing brand, Represent, the merchandise line was created to promote love and world peace amidst the recent tragic events that have taken place throughout the world.

Sam Okyere, a TV personality from Ghana known for his role on the first season of JTBC talk show, Abnormal Summit, also held a Meet & Greet to meet his fans attending KCON. Some of the Youtubers who held Meet & Greets included Jen Chae, Sunny Dahye, and Heyitsfeii, all of whom are popular for their K-beauty-related content.

There were also various workshops that gave fans the opportunity to taste and make different types of Korean cuisine. Bibigo brought their Research & Development Team to tell the fans what ingredients go in their favorite dumplings, and how to fold dumplings in different ways. The owner of Nabi Korean Restaurant also held a workshop to show fans how to make kimbap, the quick and easy way.

Whether this was your first KCON or you’re a certified KCON veteran, the largest “All Things Hallyu” convention in North America ensured a little something for everyone. Until the next convention! 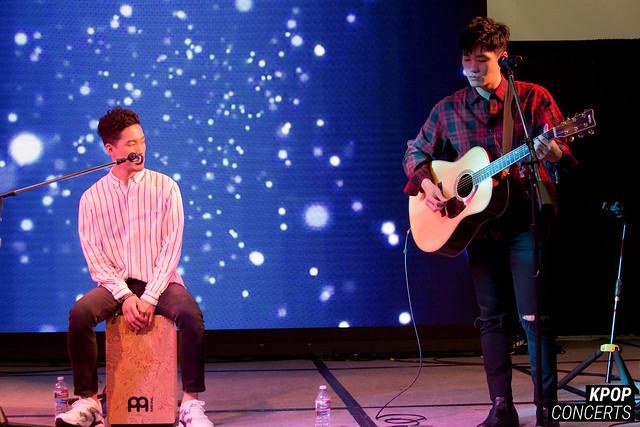