On Friday, August 10, girl crush icons Dreamcatcher kicked off their first ever US events with their highly anticipated “Dream of Us” Fanmeet in Los Angeles, CA. Formed by Happyface Entertainment, the seven-member group consists of JiU, SuA, Siyeon, Yoohyeon, Dami, Handong, and Gahyeon.  Dreamcatcher made their official debut in January 2017 and immediately set themselves apart with their edgy, rock n’ roll sound that redefined the meaning of girl crush and established their own niche in the industry. 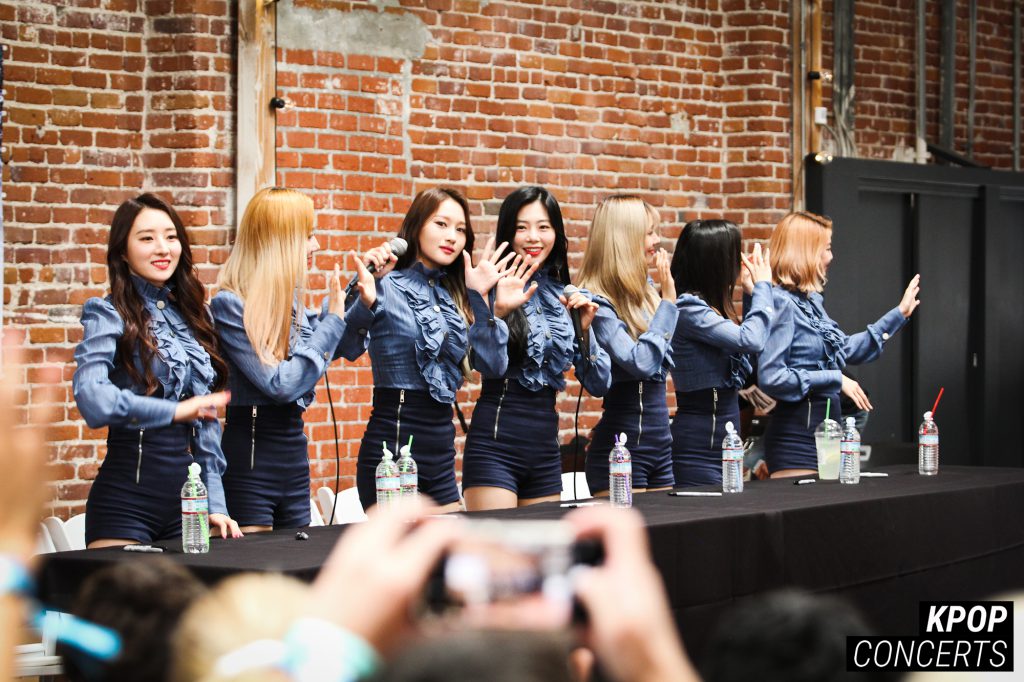 Organized by the group’s international fanbase, 7-Dreamers, the fanmeet took place in a small studio space nestled in the heart of Downtown LA. Despite the hot weather, eager InSomnia lined up hours early and eagerly awaited the event’s festivities. With this being the group’s first ever schedule in the US, even the organizers were amazed that the event completely sold out within one minute. Around 150 lucky InSomnia made the cut. Regardless of one’s spot, everyone had a perfect view of the stage. 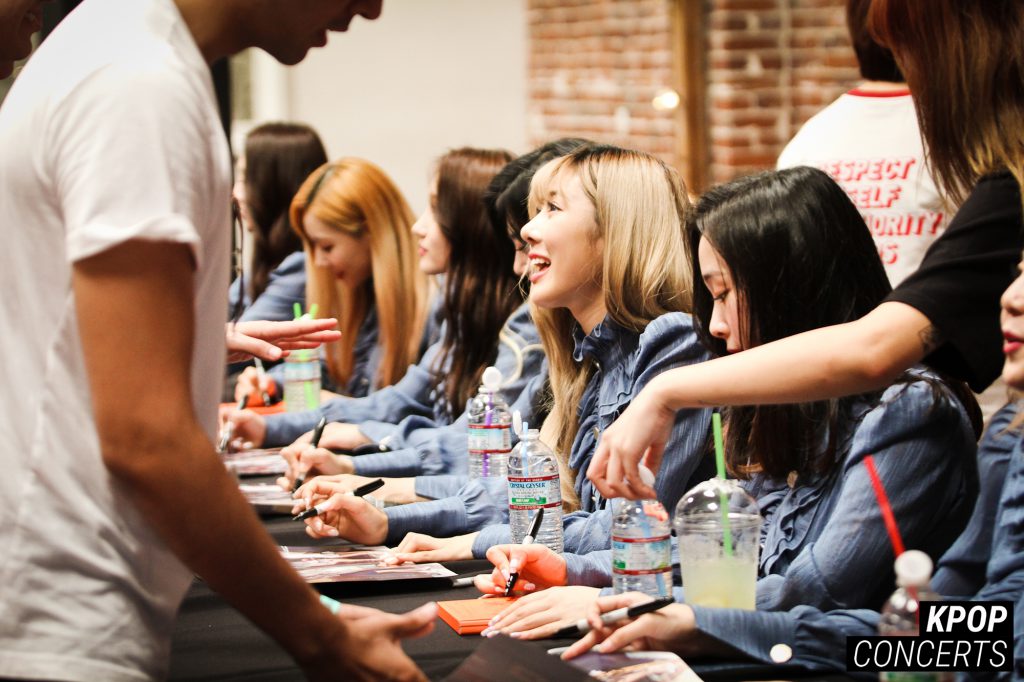 Soon after, Dreamcatcher took to the stage and kicked off their first ever US fanmeet with a fansigning. Unlike most fansignings where fans would be pressured by staff to rush through like an assembly line, this event was smooth, calm, and enjoyable for both the fans and Dreamcatcher. All 150 InSomnia were given ample one-on-one time to engage in conversation with the members, give them fan gifts, and enjoy the moment with each member as they got their albums and posters signed.

Following the fansigning, Dreamcatcher treated the audience to mini showcase! Despite wearing stand-up collar, long sleeve blouses inside the hot venue, the girls gave a flawless performance of their newest song, “You and I” and quickly followed up with “Full Moon.” Both songs were accompanied by exuberant fanchants that caused smiles to break out on the girls’ faces mid-performance. 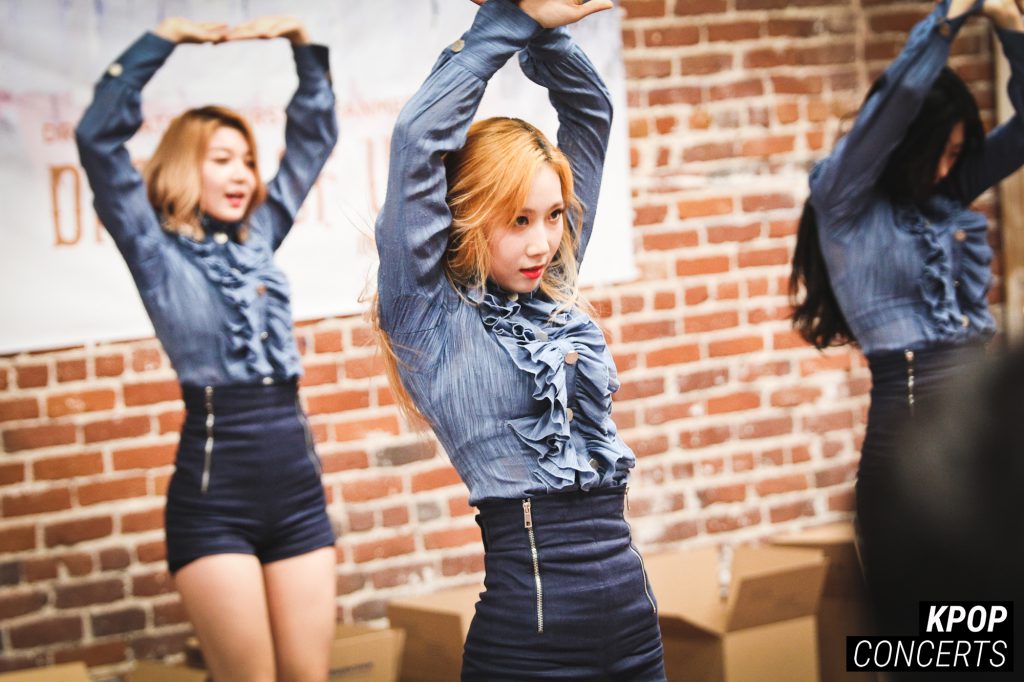 The mini showcase was quickly followed up with a Q&A session. During the fansigning, 7-Dreamers staff went around passing out sticky notes for InsSomnia to write down their burning fan questions. When asked about their favorite Dreamcatcher song, SuA’s hand immediately shot up and exclaimed “Mayday!” and sung a snippet of her line from the song. When asked about their thoughts of non-Korean speaking fans loving their songs, Handong, the Chinese member of the group, took the mic and shared, “Even though I understand that people may not understand the lyrics, I do understand that there is a connection. I’m so thankful and I’m so surprised that a lot of fans sing along to our songs.“

During the Q&A, the members got to share the songs they were currently listening to.  Siyeon answered for SuA and said that her current obsession was Childish Gambino’s “This is America” while Siyeon herself loved listening to Ariana Grande’s newest song “God Is A Woman” and “No Tears Left To Cry.” 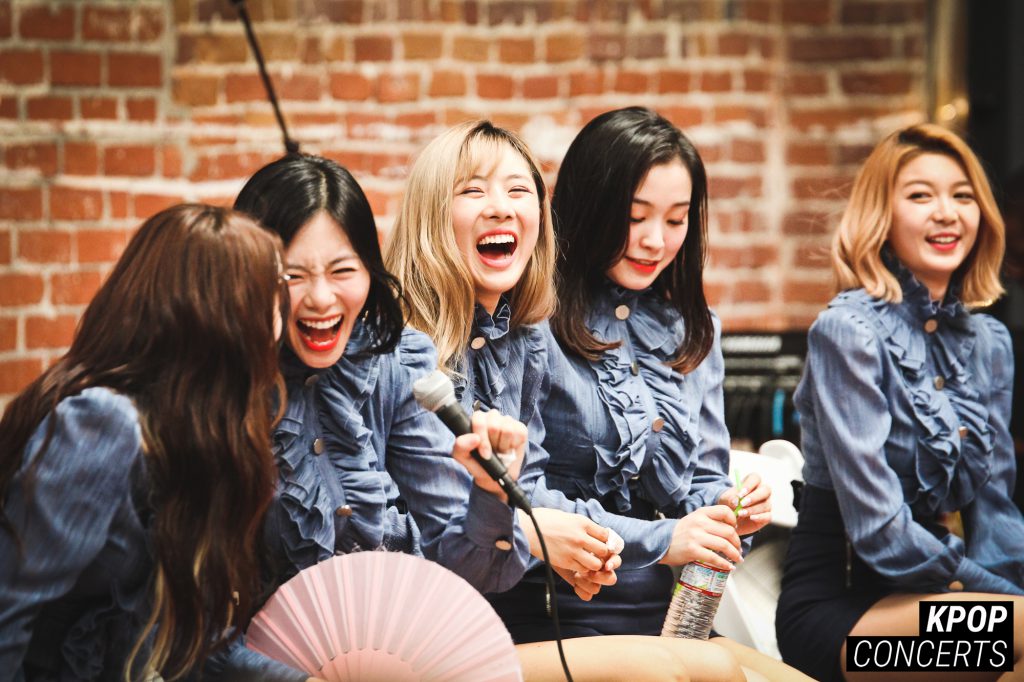 In terms of dream collaborations, Yoohyeon shared that she wanted to work with JYP’s DAY6 because she loved their live band vibes. Siyeon then shared that she would love to do a cover of Shawn Mendes’ “Treat You Better.” Since this was Dreamcatcher’s first time in LA, one question asked which Hollywood actors would they would love to run into. SuA, living up to our last interview with us, loudly proclaimed “AVENGERS!” and Siyeon shared that they visited Hollywood Blvd and saw all Hollywood Sidewalk Characters who were dressed up as heroes from the film.  Dreamcatcher also shared that they finally tried LA’s infamous IN-N-Out burgers (SuA’s favorite was “Option 3”) and had a bit of free time to go to Santa Monica Pier as well. 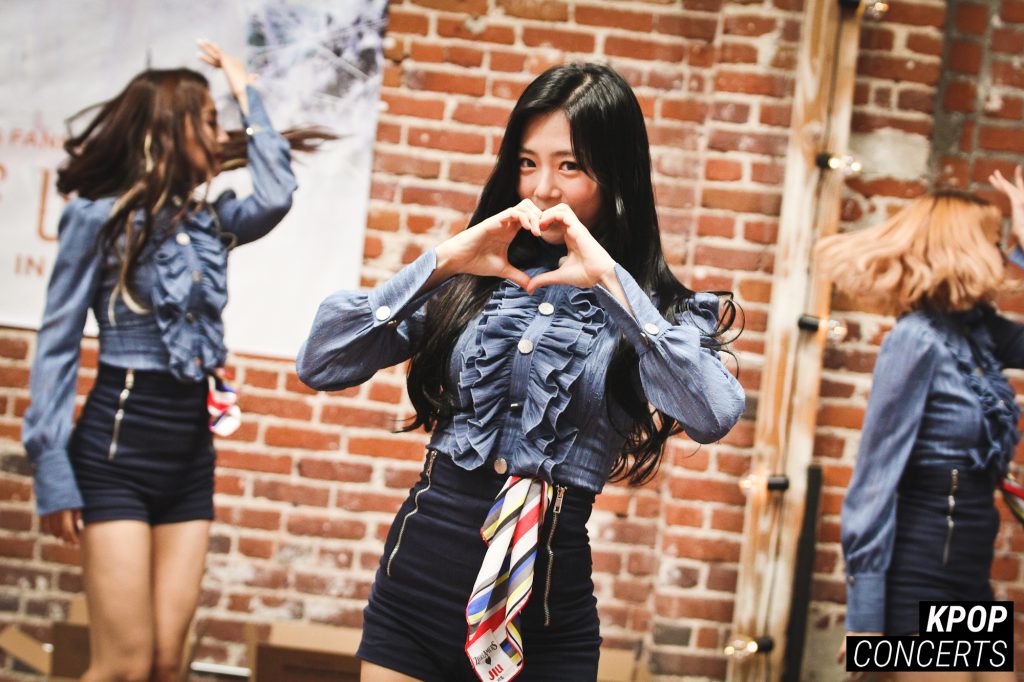 The Q&A segment wrapped up with the members’ favorites motto:

“ In life, there are no answers so do what makes you happy.”  – Dami

“‘Let’s just live happily.’ I want to tell everyone is that you’re all beautiful enough, smart enough, and happy enough. Enjoy that and be happy with your life!” – JiU

“My mother always said to me, ‘Imagine. Then it will happen.’” – Yoohyeon

Alas, the fanmeet was nearing an end and Dreamcatcher proceeded to take group photos while holding a US flag signed by their loving fans. As they said their final goodbyes, SuA (whose birthday was the day of the fanmeet) was surprised with a birthday cake from 7-Dreamers. The birthday girl had been giddy to the brim throughout the fanmeet and couldn’t contain herself any longer. “THANK YOU!” she screamed. Right when she was about to blow out her birthday candles, SuA stopped and screamed “I LOVE YOU~!” on the top of her lungs before finally blowing out the candles.

And just like that, Dreamcatcher’s first ever fanmeet was over. It was a humbling experience to see the amount of love and support Dreamcatcher and InSomnias had for one another. InSomnias had constant smiles on their faces and exuded utmost respect and admiration for the girls.

Stay tuned for our upcoming interview with Dreamcatcher after the fanmeet as well as our upcoming KCON18LA coverage that marked Dreamcatcher’s first official concert appearance in Los Angeles.

Photographed by: Mark U. and Ericka P.

[GALLERY] Dreamcatcher's 'Dream Of Us' US Fanmeet in Los Angeles