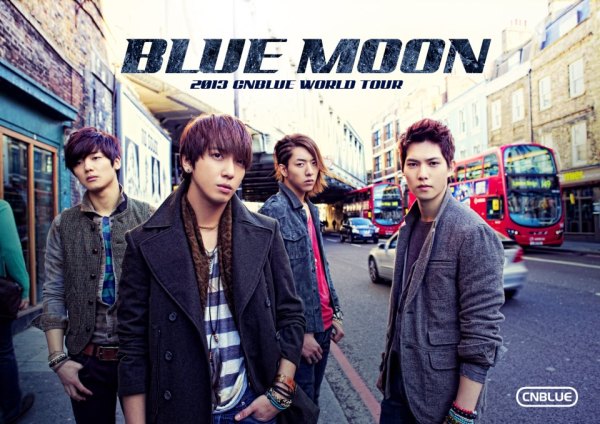 CNBLUE returned to Los Angles on their Blue Moon World Tour, successfully keeping a promise made back in 2012! This time performing at the Pasadena Civic Center, CNBLUE opened the concert with a rocking English rendition of “Where You Are” which got BOICE excitedly onto their feet. The screams of excitedly BOICE were deafening, and blue light sticks filled the audience. “Get Away” and “One More Time” got fans up on their feet and ready to rock.

After performing fan favorites such as “Man Like Me” and “Coffee Shop,” CNBLUE delighted fans with their adorable English introductions. They expressed their excitement to be back in LA, and Yonghwa and Jungshin ran across the stage and delivered excellent fan service. Fans were delighted to see Yonghwa’s adorable dance moves and surprisingly awesome beat boxing skills.

During their next song, “Wake Up,” CNBLUE definitely woke fans up by taking turns shouting “Wake up!” and having fans echo them. Yonghwa cheekily introduced the next song, “Love Light,” as a song composed especially for BOICE. Fans fell in love with its lovely acoustics. “Feeling” began with Yonghwa alone under a single spotlight skillfully playing a piano opening before the rest of the members joined him on stage for the rest of the song.

Minhyuk and Yonghwa pleaded for fans to raise the energy in the Civic Center even more! Yonghwa asked the fans if they knew what “DSM” stood for, and after fans shook their heads, Yonghwa informed the audience that it stood for “Dark, Sexy, Metal,” and that it was time to raise to go crazy and scream even louder! Many fans went home that night with sore feet and hoarse voices.

“Y, Why” was the next song, and “La, La, La” from their latest album, Re:Blue, followed. After asking the crowd to scream even louder, CNBLUE enthusiastically played “Just Please” and “Tattoo.” They playfully informed the fans that they were coming down to their last couple songs and were met with screams and yells asking for more.

Throughout the concert, the BOICE fan chants were loud and clear especially during “In My Head,” “Intuition,” and “I’m a Loner.” CNBLUE “ended” their concert with their latest hit, “I’m Sorry,” but returned for a vibrant encore after fans chanted and pleaded for them to come back. The encore consisted of five songs that included: “Hey You,” “Love Girl,” “Love,” “Try Again, Smile Again,” and even “You’ve Fallen for Me” from the drama Heartstrings. Unfortunately, the concert had come to the end, but not before fans were treated to more of Yonghwa’s adorable dance moves! CNBLUE kneeled at the front of the stage and asked fans to pose for a memorable picture with them. CNBLUE successfully completed their first solo concert in LA with a promise to return again on their next world tour.

Check out our photo gallery (cr. Stephanie Tomita) and the concert’s highlights (cr. MnetAmerica) below!

Thanks to Lauren Tom and Stephanie Tomita for their contribution!