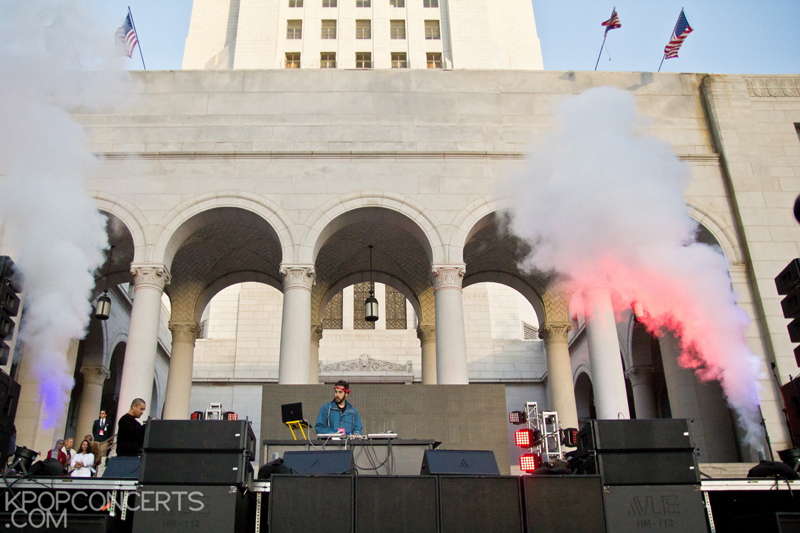 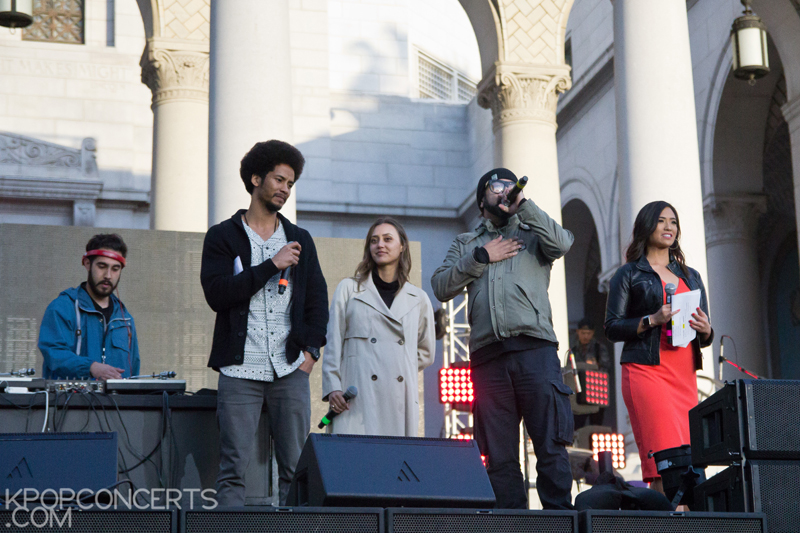 The festival was hosted by a variety of well-known personalities in the the APA community; Far East Movement, Wong Fu Productions, Shanna Mendiola, Khalif Boyd, Dia Frampton, Fresh Off The Boat stars Hudson Yang, Ian Chen, and Forrest Wheeler, and many more. 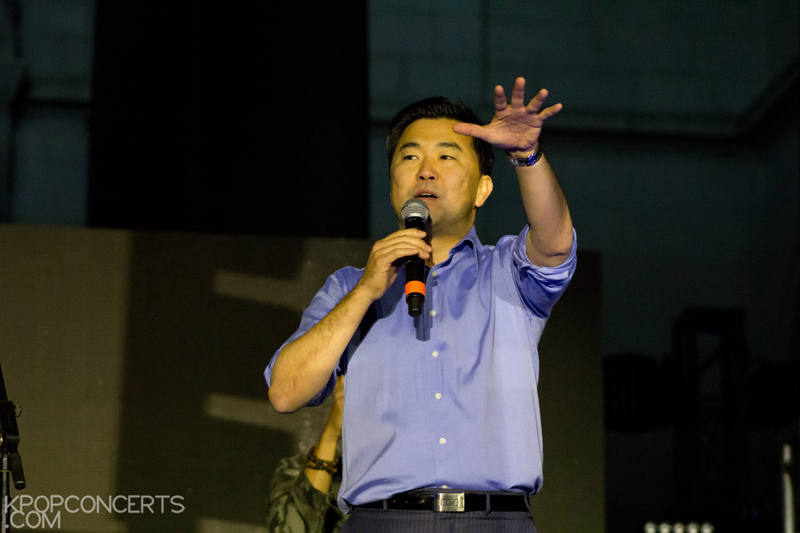 “It’s truly inspiring to see so many thousands of Angelenos come together this weekend in celebration of our Asian Pacific American communities” said Councilmember David Ryu. “Today’s celebration showcases our City’s diverse tapestry and reaffirms our commitment to the inclusion of all people.”

Festivalgoers were treated with a diverse lineup of hip-hop, R&B, and pop artists of Korean, Filipino, Taiwanese, Japanese, South Asian, and Pacific Islander heritage. Opening up the festival was Doctors & Engineers, a high energy Desi band that fuses psychedelic, surf rock and garage punk for a unique musical experience. Next up was Tenelle who gifted fans with a lil’ taste of the Aloha spirit and serenaded the crowd with her soothing island reggae tracks. Up next was Kronika, the eccentric Filipina DJ who’s known for her bopping tracks and smooth, yet lightning fast transitions that always keeps listeners on their toes, eager to hear what song she will whip out next.

One of the fan-favorite acts of the day was Year of The Ox. Comprised of members Lyricks and JL, this heavy duty duo is changing the game of Asian Americans in hip-hop. To say the crowd was lit is a complete understatement. If you didn’t know who they were, you would have gotten a major hint from their energetic fans sporting “Year of the Ox” facemasks, the “ox horn” hand signals held up high in the air, and the “Y-O-X” chants from the crowd. Their tracks’ aggressive beats perfectly coincide with the heavy weight of their lyrics that tell their personal stories of hardship and paving the way for aspiring rappers in the APA community.

Next was StarRo, the Grammy nominated producer, remixer, and DJ, who sought to revolutionize the audience’s sonic experience. Hailing all the way from Japan, he integrates all forms of art into his performance — street culture, classical to gaming soundtracks, philosophy and psychology, and so forth to meld together a new type of sonic-led movement. StarRo was accompanied by vocalists Dion Kyle and the ever-energetic Bret Loehr who were each featured on StarRo’s tracks. 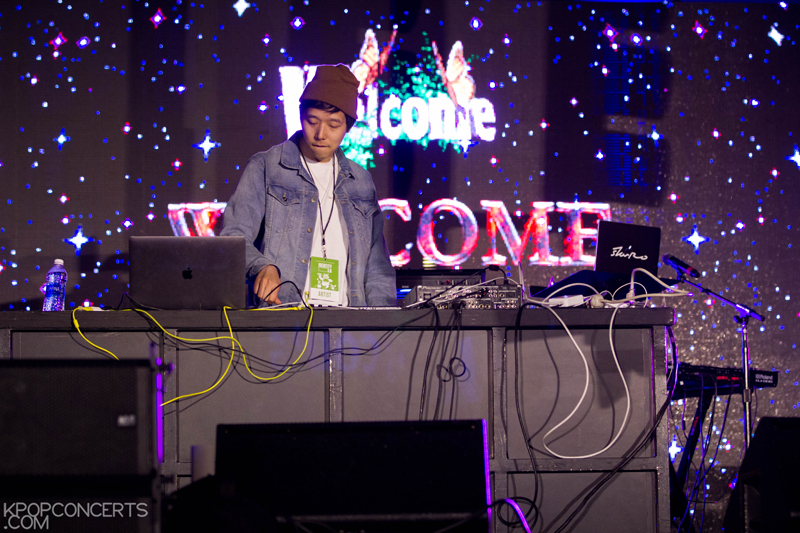 Making his way down from the Bayside Area, producer and beat guru Giraffage took his turn behind the mixer.  The Chinese American artist developed his own unique sound amidst the mainstream EDM music scene. 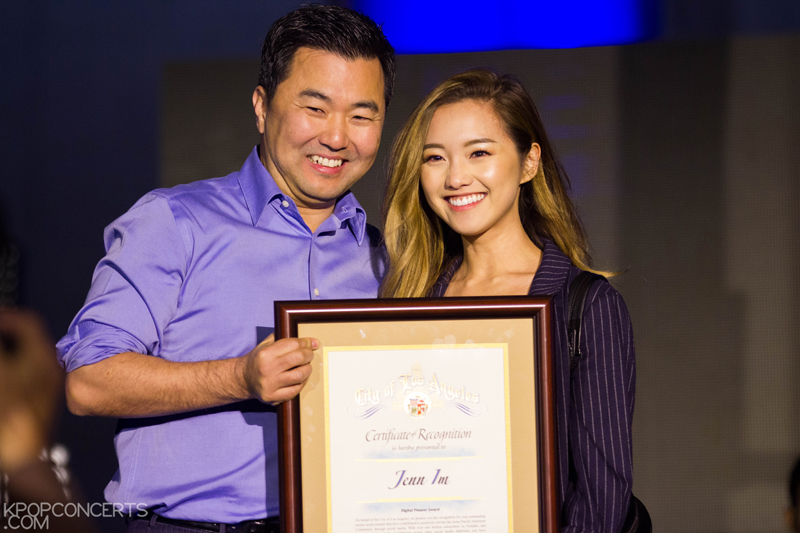 In addition to being a music festival, Identity LA took time out to honor innovators, activists, artists, and leaders who have taken major steps in the APA community. The honorees included: Alex Siv (LA Youth Award), Jenn Im (Digital Pioneer Award), Taz Ahmed & Zahra Noorbakhsh of #GoodMuslimBadMuslim (Activism Award), EPIC: Empowering Pacific Islander Communities (Community Growth Award), and the cast of Gook (Awareness Through Arts & Entertainment Award). The honorees were brought up one-on-one to center stage where their dedication to their craft and their contributions to the APA community were publically acknowledged right outside city hall. 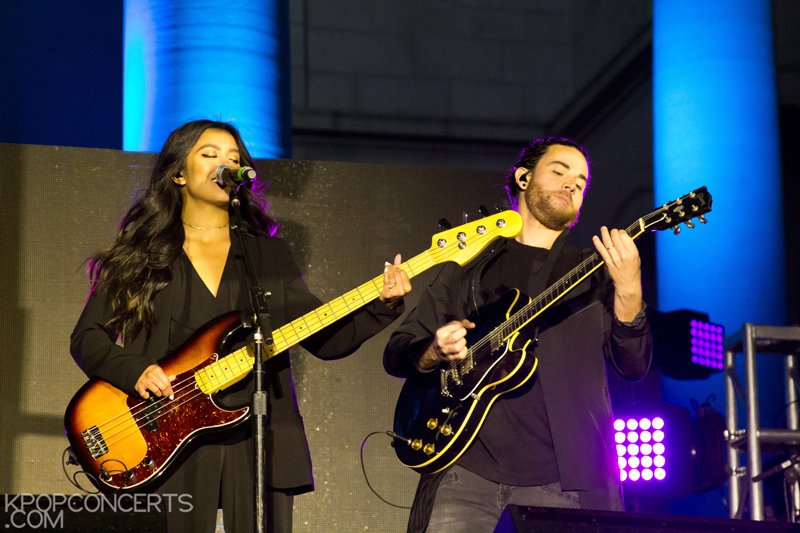 The festival did not miss a beat and promptly brought up the next performer who practically invented the term, “relationship goals.” Us The Duo, comprised of real life husband-and-wife duo Michael and Carissa Alvarado, won over the Internet with their flawless duets, impressive mashups, musicality, and strong chemistry. The couple serenaded the audience with their original hit tracks such as “Goodbye Forever.” One lucky fan’s day was made when he managed to get his ukulele signed by the couple! 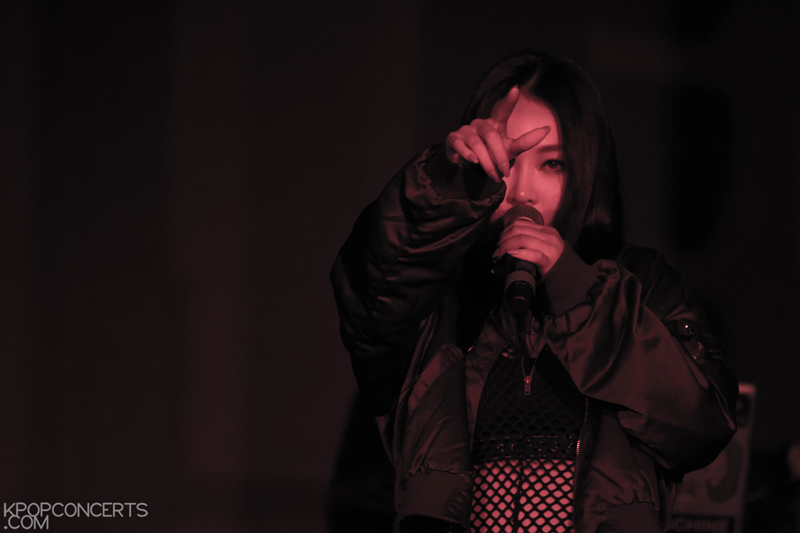 Without further ado, South Korean artist DEAN and his Club Eskimo crew took their turn on the stage to close off Identity LA. The large crowd of thousands of fangirls/fanboys erupted into a frenzy, their screams and hollers escalating a few octaves as they got their phones and selfie sticks ready. First up from the crew was Saay, the former leader of K-Pop group EvoL and newest artist under the Universal Music Korea music label. Although she has yet to officially release her music to the public, she performed “Overzone,” “Run,” and “Vlack N Vlue” from her EP on her Soundcloud. Her butter-smooth, soulful voice was practically made for R&B and rival even the best American singers in the game! 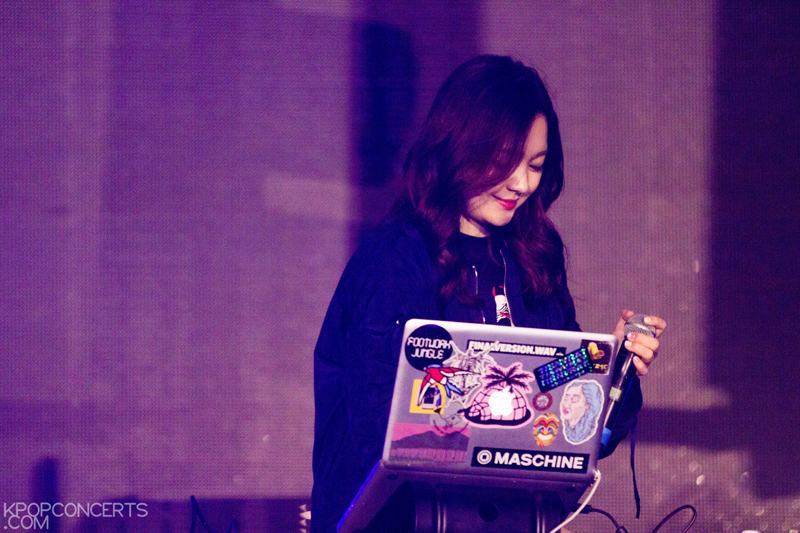 Following up was Miso, Club Eskimo’s resident DJ. She opened up her set with her self-produced track “Take Me,” the blowout hit credited with her rise to fame after topping the US Spotify Viral 50 charts. Her calm demure and soothing voice complemented her songs’ soothing and hypnotic tunes as she performed “Lost” and “Castaway” from Crush’s newest album. For her first time in Los Angeles, Miso definitely has high hopes in making a name for herself stateside. 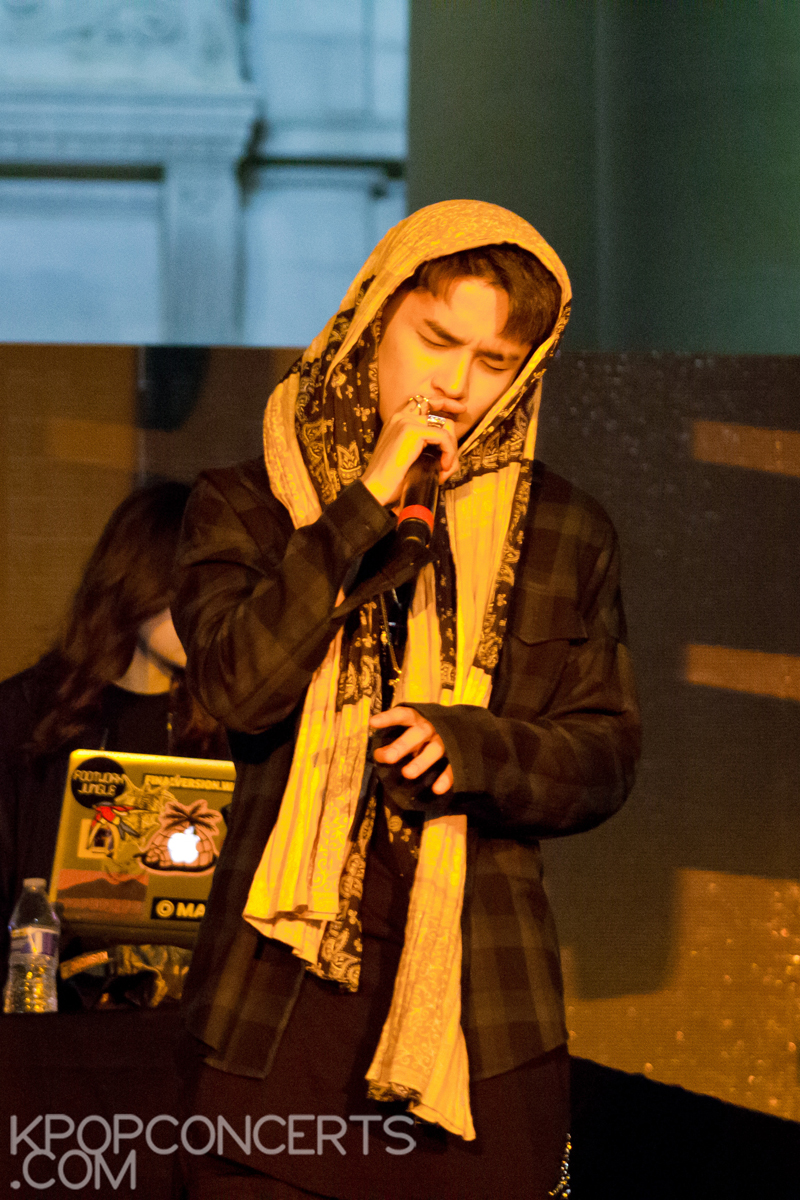 Finally, the “Prince of R&B” himself appeared onstage. Rebels lined up as early as the night before and faced the chilly LA night in order to guarantee their front row spots at the barricade. Their determination was rewarded once Dean coolly sauntered onstage and kicked off his set with “Put My Hands on You” and “Pour Up.” Despite the dreary overcast that signaled impending showers, Dean covered up in a shawl and cap and delivered a flawless performance. Singer-songwriter Jeff Bernat made a surprise appearance and joined Dean onstage to perform their 2014 hit, “What2do.” Dean continued on with “Bonnie and Clyde” and an unexpected performance of “Outro.” 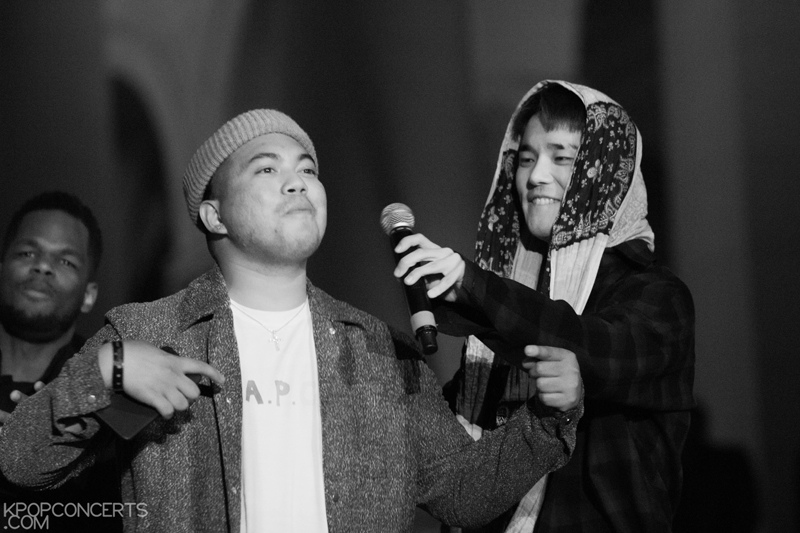 At this point of the night the frigid temperature had dropped and the wind had picked up. “It’s freezing right?” Dean remarked in English as he could visibly be seen rubbing his arms to keep warm. Dean made small apologetic remarks to all the fans who had camped out in the cold and now had to face another cold night. However, no complaints were heard. In fact, once he started teasing fans with body rolls during “21,” the energetic crowd was too hyped to notice the cold!  Dean then slowed down the night with “Half Moon.” 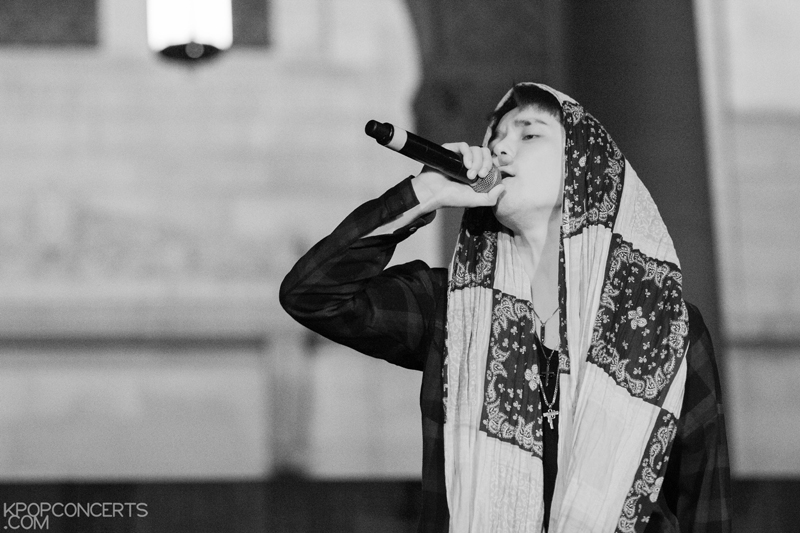 Before jumping into the last song he yelled, “We’re about to TURN UP! HANDS UP!” and ended with his debut US single, “I’m Not Sorry.” Since it was in English, the crowd did not hold back and sang along word for word. Energized by the crowd, Dean suddenly hopped off the stage, walked right up to the barricade of fans, and threw water into the crowd. As if on queue, raindrops started falling as Dean finished his last few lines to close off IDENTITY LA. Until the next music festival, check out our full photo gallery of all the performers in our Flickr Album: 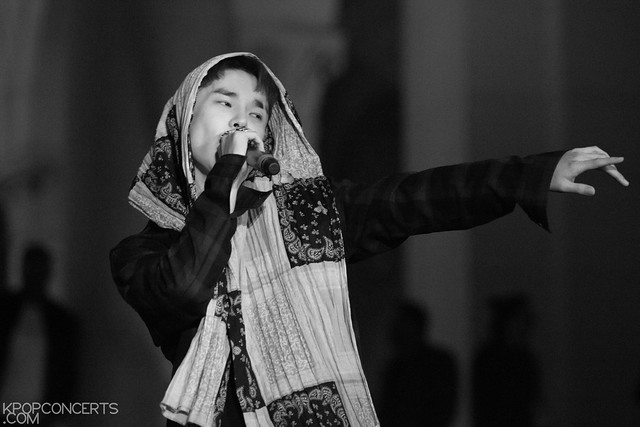 Special thanks to Transparent Agency, ISA, Wong Fu Productions, and the City of Los Angeles for having us.